What was Julia Child's Net Worth?

Julia Child was an American chef, author, and television personality who had a net worth of $50 million at the time of her death (adjusted for inflation) in 2004. Her debut cookbook, 1961's "Mastering the Art of French Cooking," is credited with popularizing French cuisine in America, and she went on to publish 16 more cookbooks as well as the memoir "My Life in France," which was posthumously published in 2006. Julia starred on numerous television shows, including the Emmy-winning "The French Chef" (1963–1973), "In Julia's Kitchen with Master Chefs" (1995–1996), and "Julia & Jacques Cooking at Home" (1999–2000). Child was portrayed by Meryl Streep in the 2009 Nora Ephron-directed film "Julie & Julia."

Julia Child was born Julia Carolyn McWilliams on August 15, 1912, in Pasadena, California. Her mother, Julia Weston, was the daughter of Massachusetts lieutenant governor/Weston Paper Company founder Byron Curtis Weston, and her father, John McWilliams, Jr., was a land manager who graduated from Princeton University. Julia had a younger brother, John, and a younger sister, Dorothy. Child attended Polytechnic School and Katherine Branson School (a boarding school in Ross, California), and she played basketball, tennis, and golf during her youth. After graduating from high school, Julia majored in history at Smith College in Massachusetts, earning her degree in 1934. Child did not learn to cook until her thirties, when she met her future husband, Paul, who was "known for his sophisticated palate."

After college, Julia moved to New York City and took a job as a copywriter in W. & J. Sloane's advertising department. In 1942, she joined the Office of Strategic Services as a typist because she was too tall to enlist in the U.S. Navy's WAVES (Women Accepted for Volunteer Emergency Service) or the Women's Army Corps. Child was later promoted to a top-secret researcher under General William J. Donovan, the head of OSS, and she also worked as a file clerk and assistant to shark repellent developers for the OSS Emergency Sea Rescue Equipment Section.

Julia received the Emblem of Meritorious Civilian Service while serving as the head of the Registry of the OSS Secretariat. When too many underwater OSS explosives were being set off by sharks, Child solved the problem by experimenting with various concoctions that were sprinkled near the explosives. This shark repellent is reportedly still in use today.

After attending the Cordon Bleu cooking school in Paris, Julia studied with master chefs such as Max Bugnard, and she joined Le Cercle des Gourmettes, a women's cooking club. There, she met Simone Beck, who asked Child to work on a French cookbook for Americans that she was writing with her friend Louisette Bertholle. The trio began teaching cooking classes for American women in 1951, and a decade later, they published "Mastering the Art of French Cooking," followed by "Mastering the Art of French Cooking, Volume Two" in 1970. 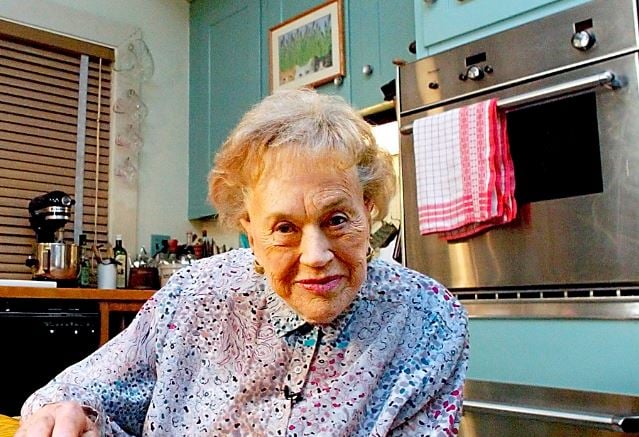 Julia married Paul Cushing Child on September 1, 1946, in Lumberville, Pennsylvania. The couple met while Paul was stationed in Kandy, Ceylon, with the Office of Strategic Services. They moved to Washington, D.C., and after Paul joined the United States Foreign Service, he was assigned to be an exhibits officer in Paris. While living in France, Julia took cooking classes at Le Cordon Bleu, graduating in 1951. Paul retired in 1961, and the couple moved to Cambridge, Massachusetts. In 1994, Paul died in a Lexington, Massachusetts, nursing home after a long illness. The following year, Julia launched The Julia Child Foundation for Gastronomy and Culinary Arts "to further her far-reaching impact as a teacher and mentor after her death." After she passed away in 2004, the Foundation began making grants to nonprofit organizations and giving out the Julia Child Award.

On August 13, 2004, Julia passed away from kidney failure at an assisted living home in Montecito, California. She was just two days away from her 92nd birthday. Child was cremated, and her ashes were placed in an underwater mausoleum near Key Biscayne, Florida, called the Neptune Memorial Reef. In 2014, the U.S. Postal Service released a set of "Celebrity Chefs Forever" stamps featuring Julia, James Beard, Joyce Chen, Felipe Rojas-Lombardi, and Edna Lewis.

Child was nominated for three Primetime Emmys, winning Achievements in Educational Television – Individuals for "The French Chef" in 1966. Her other nominations were for Special Classification of Outstanding Program and Individual Achievement – General Programming for "The French Chef" (1972) and Outstanding Informational Series for "In Julia's Kitchen with Master Chefs" (1994). Julia won two Daytime Emmys – Outstanding Service Show Host for "In Julia's Kitchen with Master Chefs" (1996) and "Julia & Jacques Cooking at Home" (2001) – and she earned two nominations in that category for "Baking with Julia" (1997 and 1999).

In 1965, she received a Peabody Award for "The French Chef," and she won a U.S. National Book Award for Current Interest (hardcover) for "Julia Child and More Company" in 1980. In 2000, Child received the Knight of France's Legion of Honor award, and she became a Fellow of the American Academy of Arts and Sciences. In 2003, she was honored with the U.S. Presidential Medal of Freedom, and she was posthumously inducted into the National Women's Hall of Fame in 2007. Julia received honorary doctorates from several universities, including Harvard University, Brown University, and Johnson & Wales University. 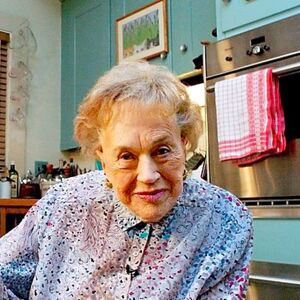