Jamie Deen net worth: Jamie Deen is an American cook, restauranteur, and television personality who has a net worth of $10 million. Jamie Deen was born in Albany, Georgia in June 1967. He is the son of Paula Deen and the brother of Bobby Deen. Jamie and Bobby run Paula Deen's restaurant The Lady & Sons in Savannah, Georgia.

He has also made frequent appearances on the TV series Paula's Home Cooking and starred on the series Road Tested with Bobby. His television series Home for Dinner with Jamie Deen debuted on The Food Network in 2012. Jamie Deen has also appeared on episodes of the TV series Good Morning America, Ellen: The Ellen DeGeneres Show, Rachael Ray, Paula's Party, Kathy Griffin: My Life on the D-List, Paula's Best Dishes, Entertainment Tonight, Steve Harvey, The Chew, Southern Fried Road Trip, Positively Paula, and more. Jamie married Brooke Terry Deen in 2005 and the couple has two sons. 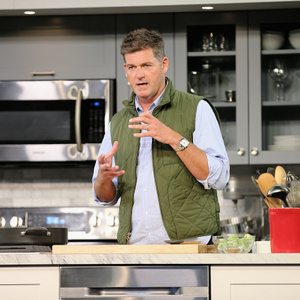