James Martin Net Worth: James Martin is an English chef and TV personality who has a net worth of $5 million. Born in 1972 in Malton, North Riding of Yorkshire, England, James Martin studied at Scarborough Technical College before landing work cooking in some of France's best kitchens. After returning to England, Martin cooked at One Ninety Queen's Gate, Alastair Little, The Square, and Harvey's in London.

He took work as a pastry chef at the Chewton Glen Hotel and as the head chef at the Hotel du Vin. Martin's TV cooking career began in the mid-'90s. He appeared on "James Martin: Yorkshire's Finest" and later "Ready Steady Cook". He worked as a presenter on "Stately Suppers" and "Saturday Kitchen" before cooking on "Richard & Judy". Martin appeared as a dancer on "Strictly Come Dancing" in 2005 alongside Camilla Dallerup. His other TV appearances include "Sweet Baby James", "Can You Cook It?", "The Great British Village Show", "James Martin's Christmas Feats", "Eating with the Enemy", and "Operation Hospital Food". Martin's more recent work includes presenting the show "United Cakes of America", where he tasted cakes along the east coast of the U.S. He also appeared on "James Martin's Food Map of Britain" and "James Martin: Home Comforts". Martin previously penned a column for "The Mail" on Sundays and continues to write for "Good Food" magazine. He has opened three restaurants: The Leeds Kitchen, James Martin Manchester, and a restaurant inside The Talbot Hotel. 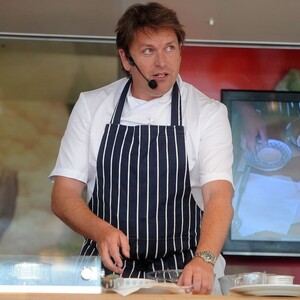