Torres grew up in France and was an apprentice at a pastry shop at 15. He then worked at Hotel Negresco while attended culinary school and earned a Master Pastry Chef degree. He taught pastry courses in Cannes in the mid-80s. He won the Meilleur Ouvrier Patissier de France competition in 1986, becoming the youngest to do so. He then moved to the United States and became the Corporate Pastry Chef for the Ritz Carlton Hotel Company in 1988. Torres then worked at Le Cirque for 11 years as their Executive Pastry Chef. He joined International Culinary center and became the Dean of Pastry Arts. He opened a chocolate factory and retail store in Brooklyn, New York in 2000. Torres has won the James Beard Foundation Pastry Chef of the Year. He has authored two books and hosts the show Chocolate with Jacques Torres for the Food Network. He has starred in the TV series Dessert Circus with Jacques Torres and released three cookbooks. He married chocolatier Hasty Khoei in 2007. 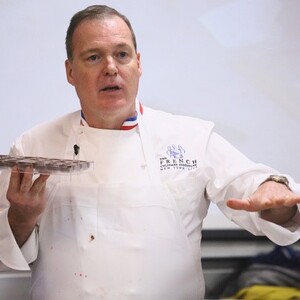