Heston Blumenthal net worth: Heston Blumenthal is a British celebrity chef who has a net worth of $10 million. Heston Blumenthal was born in Kensington, London, England in May 1966. He is the proprietor of The Fat Duck which was voted #1 in the World's 50 Best Restaurants in 2005 and is one of only four restaurants in Great Britain to obtain three Michelin stars. Blumenthal also owns the restaurant Dinner in London and the pubs The Crown at Bray and The Hinds Head. He has invented recipes for soft-centered Scotch eggs and triple-cooked chips. He has been featured on several television series and won many awards. Blumenthal has authored the books Family Food: A New Approach to Cooking, In Search of Perfection, Further Adventures in Search of Perfection, The Fat Duck Cookbook, Total Perfection: In Search of Total Perfection, Heston's Fantastical Feasts, Heston Blumenthal At Home, and Historic Heston. 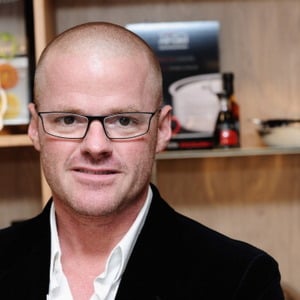