What is Guy Fieri's net worth and salary?

Guy Fieri is an American restaurateur, author, television personality and game show host. As of this writing, Guy Fieri has a net worth of $50 million. Guy is best known for being the longtime host of "Diners, Drive-Ins, and Dives" on The Food Network. He also hosts "Guy's Grocery Games." Guy landed his own Food Network show after a successful appearance on the second season of "Next Food Network Star". He has gone on to host more than a dozen different shows on The Food Network.

Today Guy Fieri is one of the most popular Food Network personalities and has parlayed that popularity into a branded line of restaurants, sauces, and other merchandise. He's lent his name to a franchise of "ghost" kitchens called Flavortown Kitchen that has more than 170 location in the United States. Guy and Sammy Hagar co-own a tequila company called Santo Tequila.

Guy's big break came after he appeared on the second season of "Next Food Network Star." This appearances led to his own show, "Guy's Big Bite" which ran six episodes. Guy earned just $1,000 per episode.

In 2018 Guy signed a 3-year, $30 million contract with The Food network. That contract worked out to an annual salary of $10 million.

Guy Fieri was born on January 22, 1968, in Columbus, Ohio but grew up in a rural area of Northern California called Ferndale, in Humboldt County. His parents operated a Western-style clothing store. He has said that his interest in food began in earnest as a high school student when a stint in France for a study abroad program expanded his imagination to the possibility of food.

But Fieri's career in food actually began even earlier than that, when a very young Fieri earned extra money by manning a roadside "Awesome Pretzel" cart. Eventually, after graduating from the University of Nevada, Fieri got his first real restaurant job at Parker's Lighthouse, an eatery in Long Beach that hired him as manager. He quickly found a knack for the business, going on to manage six Louise's Trattoria restaurant locations.

It was only a matter of time before Fieri opened a restaurant of his own. He and Steve Gruber set up shop in Santa Rosa, California in 1996, opening a place called Johnny Garlic's. The food was good enough for the franchise to expand to many other locations in California, and Fieri has continued to be active in the restaurant business even after finding Food Network stardom in the early 2000s. In 2012, Guy capitalized on his celebrity by opening up Guy's American Kitchen and Bar in New York City. Fieri's personal brand might have been popular with the public, but the restaurant was also the subject of probably the most infamous restaurant review of all time, by Pete Wells of The New York Times. In any case, the restaurant closed in 2017.

Fieri has had more subsequent success with other restaurants, like Guy's Burger Joint, found on Carnival cruise ships, Guy Fieri's Vegas Kitchen and Bar in Las Vegas, and Guy Fieri's Baltimore Kitchen & Bar at the Horseshoe Casino in Baltimore. Then in 2018, Fieri collaborated with Robert Earl (the man behind the Planet Hollywood franchise) to open Chicken Guy! at Disney Springs in Orlando, Florida.

Guy Fieri's loud fashion sense and humorous personality made him a natural fit for TV stardom, especially in a cable TV climate that was constantly churning out more and more food-related programming. His big break in this area came courtesy of the second season of The Next Food Network Star in 2006, which he won handily. Soon after, Guy's first Food Network show Guy's Big Bite premiered in June 2006 and went on to air over 190 episodes across 13 seasons, the last episode having aired in 2016. But it was his next show, Diners, Drive-Ins and Dives which premiered a year later that has since gone on to be one of the most popular shows on the Food Network and a true pop culture phenomenon.

Fieri has continued to be a fixture on The Food Network, putting out a wide variety of series and specials on the channel. In 2008, he and Unwrapped host Marc Summers were co-hosts of Ultimate Recipe Showdown, which ran for three seasons. Later that year, Guy experimented with a live studio audience format in Guy Off The Hook, but the series was shortly discontinued, while the set was reused for another special entitled Guy's Family Feast which aired live on Thanksgiving, 2008. In 2012, he faced off against fellow Food Network star Rachael Ray in Rachael vs. Guy: Celebrity Cookoff. Guy's Grocery Games followed in 2013, and in 2017 he premiered yet another Food Network series, Guy's Family Road Trip. He's also appeared on many other Food Network shows as well, including Dinner: Impossible, Paula's Party, Ace of Cakes, and The Best Thing I Ever Ate.

Despite a very busy schedule from owning restaurant franchises and appearing on Food Network day and night, Guy has also worked on TV in non-food-related capacities. In 2009, Guy made his mainstream game show host debut as the host of Minute to Win It, which ran for a total of two seasons. He's also done his fair share of TV advertising, promoting brands like TGI Friday's, Aflac, and a California auto parts brand called Flowmaster. 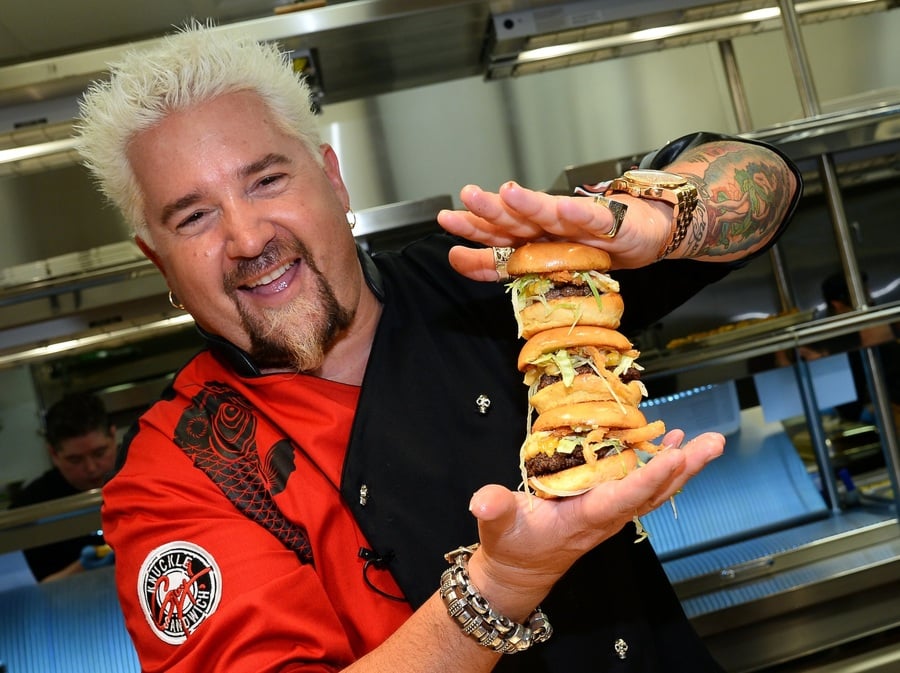 Fieri has leveraged his personal brand in a wide variety of ways. He has licensed his name to Disney theme parks, cruise ship lines and restaurants around the world.

In 2009, he toured the country along with other Food Network personalities for the Guy Fieri Roadshow, and made appearances at many other events like the Atlantic City Food and Wine Festival and South Beach Food and Wine Festival, both in 2012. At the latter event, he made headlines for officiating 101 gay weddings, a duty he repeated again in 2015 at the nuptials of famous chef Art Smith in Miami Beach. He's also part of the select fraternity of celebrities who own their own vineyards with the founding of Hunt & Ryde, his own wine label. It gets its name from his two sons – Hunter and Ryder. Guy also has a line of tequila developed with fellow Bay Area entrepreneur/celebrity, Sammy Hagar.

In March 2020, at the height of the first wave of the COVID-19 crisis, Guy partnered with the National Restaurant Association in a fundraising effort that eventually raised $21.5 million. They ended up distributing grants to thousands of laid-off restaurant workers and restaurants.

Guy's last name Fieri was adopted by Guy in homage to his Italian grandfather Giuseppe Fieri. He changed it back from the anglicized spelling of the name "Ferry" in 1995 soon after marring his wife Lori. They have two sons (the aforementioned Hunter and Ryder).

Guy owns a 450-acre ranch near Napa, California. Guy collects classic cars as a side hobby. 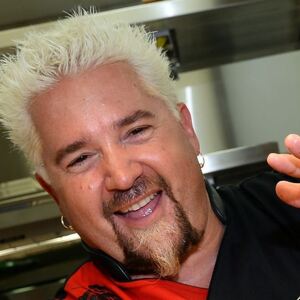