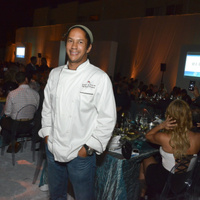 Govind Armstrong Net Worth: Govind Armstrong is an American professional chef who has a net worth of $1.5 million. Armstrong's specialty is Californian cuisine, style that imprints most of his craft. Born in Inglewood, California in 1969, he spent most of his childhood on the Caribbean Coast of Costa Rica and in Los Angeles. In 1982, at the early age of 13, Armstrong begged Wolfgang Puck for a job at the original Spago restaurant; this is where he began his training. Spago is probably the birthplace of Californian cuisine, hence Armstrong´s hallmark of quality seasoning. Armstrong also worked with L.A. important food restaurants such as Campanile, City restaurant, and Patina and Pinot. He has gone international as he traveled to Europe to improve his art. He trained at high quality restaurants, including Arzak, in San Sebastián, Spain. Upon his return to the States, he opened a small restaurant with a friend, "Chadwick", but it was short-lived. In 2003, Armstrong opened the first "Table 8" restaurant in L.A., opening a second one in Miami in 2006. Furthermore, he is the owner and executive chef of "8 oz Burger Bar", which is a very popular restaurant located in several cities in the United States. Later on, he opened "Post and Beam" in Los Angeles which offers a variety of styles in Southern cuisine. Nonetheless, Armstrong is the author of several cookbooks, including "Small Bites, Big Nights", and has appeared on Bravo´s series "Top Chef" as a guest judge and was a contestant at Food Network´s "Iron Chef America".