What is Giada De Laurentiis' Net Worth and Salary?

Giada De Laurentiis is an Italian-American chef, writer, and TV personality who has a net worth of $30 million. She is best known for being the host of her own Food Network shows, "Everyday Italian" and "Giada at Home." Giada has also written a number of highly-successful books.

Giada Pamela De Benedetti, better known as Giana De Laurentiis, was born on August 22, 1970, in Rome, Italy. She is the eldest child of actress Veronica De Laurentiis and actor/producer Alex De Benedetti. She has three younger siblings: a sister, Eloisa, and two brothers, Igor and Dino Alexander II. Her maternal grandfather, Dino De Laurentiis, was a legendary filmmaker and also owned his own restaurant, DDL Foodshow. Giada spent a lot of time in the kitchen growing up, including at her grandfather's restaurant. After her parents divorced, her mother moved her and her siblings to Southern California. They also all took on their mother's surname, De Laurentiis. In California, Giada attended Marymount High School in Los Angeles. She continued her education at the University of California, Los Angeles, graduating in 1996 with a bachelor's degree in social anthropology.

Following her graduation from college, De Laurentiis moved to Paris, France, to study at Le Cordon Bleu. Her original goal was to become a professional pastry chef. Having completed her studies, she returned to Los Angeles and began working in several local restaurants, including Spago (owned by Wolfgang Puck). Then, she moved on to work as a food stylist. It was while she was a food stylist that she began attracting the attention of the Food Network; they contacted her after she styled a piece in "Food & Wine" magazine in 2002.

Subsequently, the Food Network offered her the opportunity to have her own show with them. "Everyday Italian" premiered on April 5, 2003. Initially, right after the show began airing, the Food Network actually received public backlash, with many accusing the show of hiring a model or actress to pretend to cook instead of a real, qualified chef. The criticism did not stop the network or De Laurentiis, and in 2006 she began hosting the show "Behind the Bash". The program was produced by Atlas Media Corp., and examines the catering process behind big extravagant events like awards ceremonies. Showing no signs of slowing down, her third show debuted on the Foot Network in January 2007. This show, "Giada's Weekend Getaways", featured De Laurentiis traveling around various American locales and taking viewers to her favorite culinary destinations there. Some of the places featured on the show include Seattle, Washington; South Beach, Florida; San Francisco and Napa in California; and Jackson Hole, Wyoming.

Other shows De Laurentiis has hosted include "Giada at Home", which features her cooking and preparing meals for family and friends in a set similar to her own home; and "Giada Entertains", which won a Daytime Emmy Award for Outstanding Culinary Series on June 26, 2020. Other awards De Laurentiis has won include the Daytime Emmy Award for Outstanding Lifestyle Host in 2008, and Outstanding Culinary host in 2020.

Additionally, she has appeared on a multitude of other shows, including an episode of "Iron Chef America" in 2006 where she competed alongside Bobby Flay, and lost to Rachael Ray and Mario Batali; the two-part Food Network special "Giada in Paradise", where she traveled to Santorini, Greece, and Capri, Italy; the show "The Next Food Network Star", as a guest judge on the third season, an on-set mentor on the sixth season, and regular judge on the seventh and eighth seasons. De Laurentiis has also done some work as a voice actress. She voiced the character Paulette on the animated children's show "Handy Manny"; the character Gelata in the US version of the Disney special "Pixie Hollow Bake Off" (2014); and voiced a fictionalized version of herself in the animated movie "Scooby-Doo! and the Gourmet Ghost" (2018). 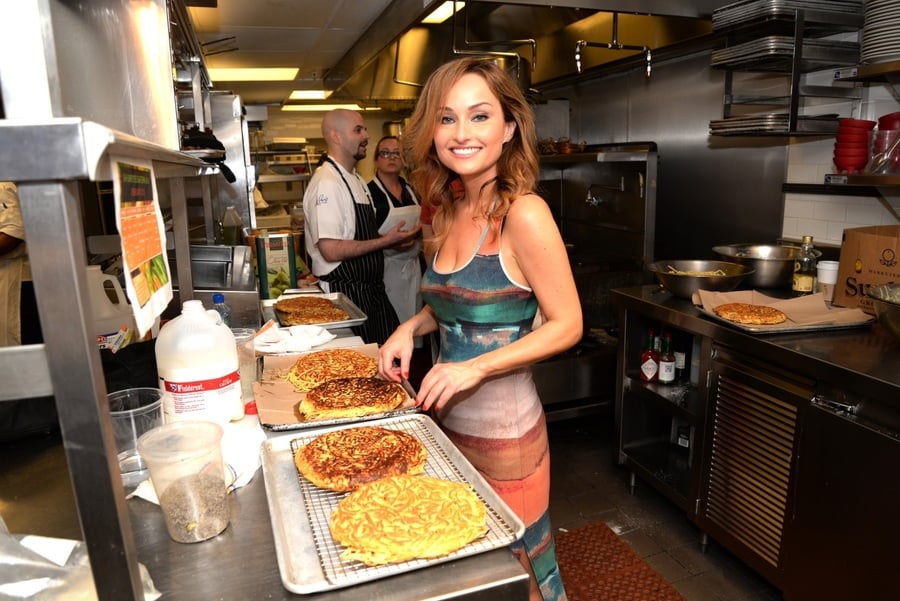 Other Ventures and Projects

In 2008, De Laurentiis and the Barilla Group partnered together to launch an Italian gourmet pasta line under the Academic Barilla name. This was Barilla's first-ever gourmet product line produced in collaboration with a celebrity. Then, in 2010, she partnered with Target to release an exclusive line of kitchen supplies. Featured products included stainless steel pots and pans, a variety of utensils and cooking tools, and a limited number of food items such as sauces and pastas.

De Laurentiis has also opened multiple restaurants. The first, named GIADA, opened in July 2014. It is located inside The Cromwell in Las Vegas, Nevada. The GIADA menu features California-influenced Italian cuisine, and it's wine selection won the 2019 Best of Award of Excellence from "Wine Spectator". As a special event, GIADA offers "Book Club Brunch", where guests can taste and try recipes from De Laurentiis's cookbooks; there is also the option to book a cooking class and learn how to make a four-course meal from the GIADA chefs. For guests in Las Vegas looking for a more casual, quick dining option, De Laurentiis opened her second restaurant, Pronto by Giada, in Caesars Palace in early 2018. The menu, similar to the menu at GIADA, offers classic Italian food with Californian influences, but in a more casual format. Her third restaurant, GDL by Giana, is located in the Horseshoe Casino Baltimore, in Baltimore, Maryland. It opened in May 2018, and features a "modern twist on traditional Italian dishes".

De Laurentiis married fashion designer Todd Thompson in May 2003. Their only child together, Jade Marie De Laurentiis-Thompson, was born in March 2008. In December 2014, De Laurentiis confirmed that she and Thompson had actually split, and their divorced was finalized in September 2015. Since late 2015 De Laurentiis has been romantically linked to TV producer Shane Farley.

In March 2016, Giada spent $6.9 million on a home in the Pacific Palisades neighborhood of Los Angeles. In August 2019 she spent $4.86 million on a second Palisades home.