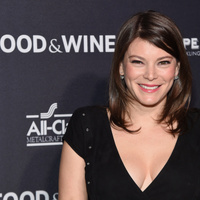 Gail Simmons Net Worth: Gail Simmons is a Canadian culinary expert, author, and television personality who has a net worth of $2.5 million. Gail Simmons was born in Toronto, Ontario, Canada in May 1976. Gail graduated from McGill University in Montreal. She started her career writing restaurant reviews for the McGill Tribune and later for Toronto Life magazine and the National Post newspaper. She attended the Institute of Culinary Education in New York City and apprenticed at Le Cirque and Vong. She became a judge for Top Chef in 2006 and has hosted the show Top Chef: Just Desserts. She published her memoir Talking With My Mouth Full: My Life as a Professional eater in 2012. Simmons has appeared on The Today Show, Fox & Friends, and Good Morning America, as well as at many prominent culinary festivals. Simmons serves as the Special Projects Director for Food & Wine magazine. Gail Simmons is featured in the online video series The Pantry Project on KitchenDaily.com. She supports the organization Common Threads and was a founding member of Food & Wine's Grow for Good Campaign. Simmons was named the #1 Reality TV Judge in America by The New York Post. Gail married Jeremy Abrams in 2008.