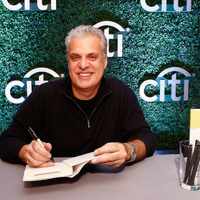 Eric Ripert net worth: Eric Ripert is a French chef, author, and television personality who has a net worth of $20 million. Eric Ripert was born in Antibes, France in March 1965. He specializes in modern French cuisine and seafood. His flagship restaurant Le Bernardin is located in New York City and ranked #17 on The World's 50 Best Restaurants and has a four star rating from The New York Times and three stars from the Michelin Guide. He has appeared on several TV series including Top Chef, Anthony Bourdain: No Reservations, Anthony Bourdain: Parts Unknown, Treme, and more. Eric Ripert has authored the books and cookbooks Le Bernardin Cookbook, A Return to Cooking, On the Line: The Stations, the Heat, the Cooks, the Costs, the Chaos, and the Triumphs, Avec Eric: A Culinary Journey with Eric Ripert, My Best: Eric Ripert, and 32 Yolks: From My Mother's Table to Working the Line.