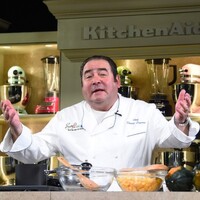 What is Emeril Lagasse's Net Worth and Salary?

Emeril Lagasse is an American celebrity chef, restaurateur, television personality and cookbook author who has a net worth of $70 million. Emeril is one of the most successful celebrity chefs of all time and arguably pioneered the concept of being a celebrity chef in the first place. His personal cooking style and flair for the dramatic are also part of his signature persona.

Emeril John Lagasse III was born October 15, 1959 in Fall River, Massachusetts to a French-Canadian father, Emeril John Lagasse Jr., and Portuguese mother, Hilda Medeiros. He worked in a Portuguese bakery as a teenager where he discovered his talent for cooking. Lagasse was also a talented percussionist. After high school graduation, Lagasse was offered a full scholarship to the New England Conservatory of Music, but decided to pursue a career as a professional chef instead.

He spent the next year training at Johnson and Wales University in Providence, Rhode Island. In order to pay his tuition, Lagasse took a job at a local restaurant where he met fellow student Elizabeth Kief. The two married in October 1978, a few months after Lagasse completed his course work. Lagasse polished his skills in Paris and Lyon, France before returning to the United States, where he spent the next few years working in fine restaurants throughout the Northeast. In 1982, Lagasse replaced Paul Prudhomme as executive chef of the famed New Orleans restaurant Commander's Palace. This demanding position, which required Lagasse to work 18 hours a day, put a strain on his marriage. In 1983, Emeril was nominated as Chef of the Year.

After seven and a half years at Commander's Palace, Lagasse finally opened his first restaurant, Emeril's, in 1990. Located in New Orleans' underdeveloped Warehouse District, the menu fused elements of French, Spanish, Caribbean, Asian and Lagasse's native Portuguese cuisine. It was named Restaraunt of the Year in Esquire magazine and has been a recipient of the Wine Spectator Grand Award since 1999. He has franchised his restaurants and many of them are located in New Orleans. Emeril's corporate office is also based in NOLA.

Immediately well-received by patrons and critics, Lagasse went on to open other restaurants. He is the executive chef and proprietor of thirteen Emeril's restaurants. Other locations include Las Vegas, Orlando, and Pennsylvania, his home state. He also hosts cooking shows. From 1993-1995, Emeril was the original host of Food Network's "How to Boil Water". In 1993, Lagasse was one of the sixteen chefs featured in Julia Child's series Cooking with Master Chefs. Lagasse appeared on several other Food Network programs before hosting his own show, "Essence of Emeril." "Essence" in the title refers to the name of his own concocted spice blend, Emeril's Essence, which is available to buy commercially. He is known to suggest that viewers create their own spice blends that reflect their personal taste. In early 1997, he began production on "Emeril Live".  Emeril is known for his jovial hosting style and liberal use of pork fat enthusiasm, and the catch phrases "Bam!" and "Kick it up a notch!" have been his trademark. Lagasse also hosted a daily series, "Emeril Green", on Discovery Channel's network Planet Green. This series focused on cooking with local, organic, and seasonal produce. It was filmed on location across the US at various Whole Foods Markets. He has also hosted "The Emeril Lagasse Show", "Emeril's Table", and "Emeril's Florida." The latter lasted for five seasons, from 2013-2017. He hosted "Eat the World with Emeril Lagasse" on Amazon Video in 2016. It won a Daytime Emmy for Outstanding Culinary Program in 2017. Over his career, Emeril has released ten cookbooks and has guest-starred on many cooking shows and news programs. He has worked as a food correspondent for ABC's "Good Morning America" since 1998.

In 2012, Lagasse guest-starred as himself on an episode of HBO's "Treme", set in New Orleans. His scene was written by fellow chef and "Treme" writer Anthony Bourdain. Bourdain stated afterward that writing the scene was "a dream" for him to be able to depict the less joyful and exuberant and more burdened side of Lagasse, which has been said to exist in real life but is never shown on his cooking shows.

Lagasse also founded his own brand of dry grocery products including pasta sauces, marinades, salsas, and more. He started two lines of kitchen knives produced by Wusthoff, cookware made by All-Clad, and a series of kitchen electrical appliances by T-Fal. 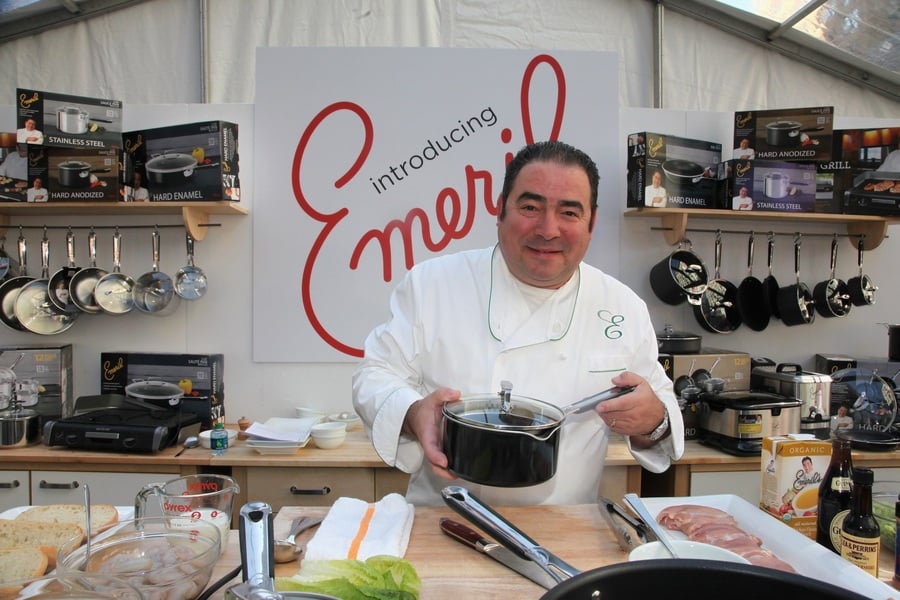 In February 2008, Emeril sold everything except his restaurant chain to Martha Stewart's holding company MSLO for $50 million ($45 million in cash and $5 million in stock). These assets were merged into a company called Sequential Brands Group in 2015 and then sold in 2019, along with Martha Stewart's assets, to Marquee Brands for $175 million. But by that point Emeril was long gone.

Emeril started the Emeril Lagasse Foundation in 2002. It supports non-profits and educational initiatives that create opportunities for disadvantaged and underprivileged children. It has distributed over six million dollars in grants for charities. Projects funded by the foundation include gardens, fresh food cafeterias, and teaching kitchens at the Edible Schoolyard New Orleans, and the Orlando Junior Academy Edible Schoolyard. It also funds the St. Michael Special School's accessible learning kitchen for students with special needs, a four-year culinary arts program for High School students at the New Orleans Center for the Creative Arts, and others. The foundation hosts a signature annual fundraiser each fall called Carnivale du Vin. It ranks among the Top Ten U.S. Charity Wine Auctions in Wine Spectator Magazine. In 2013, Lagasse received the James Beard Foundation Humanitarian of the Year award.

Emeril was married to his first wife Elizabeth Kief from 1978-1986. Lagasse had a second marriage to fashion designer Tari Hohn that lasted from 1989-1996. Third time's a charm hopefully because Lagasse got married again in May 2000 to real estate broker Alden Lovelace. They have two children and split their time between New Orleans and Destin, Florida.

In November 2020, Aldin and Emeril listed their Destin, Florida home for sale for $5.25 million. The home, which is 8,000 square-feet, was actually acquired in an off-market deal from Aldin's cousin. They literally swapped houses, with the cousin moving into the Lagasse's house.