How much is Duff Goldman Worth?

Duff Goldman net worth: Duff Goldman is an American pastry chef and television personality who has a net worth of $5 million dollars. Duff Goldman was born Jeffrey Adam Goldman in Detroit, Michigan in December 1974. He graduated from Sandwich High School in Massachusetts. He started working in kitchens at 14. He was hired to make biscuits and cornbread for Charleston restaurant in Baltimore. He attended the Culinary Institute of America at Greyston in Napa Valley, California. He worked under chefs at French Laundry and the Vail Cascade Hotel. He returned to D.C. to work at Olives baking bread. Goldman opened Charm City Cakes in 2000 and worked out of his house. He hired architects, sculptors, and painters to work on his cakes. He and his team have created cakes shaped as Elvis, a volcano, a German Shepherd, a CAT scan machine, a Jeep, and Wrigley Field. He has made cakes for Tom Clancy, Lost, 30 Rock, and Sir Roger Moore. He and his brother Willie released a book in 2009. Goldman and his company Charm City Cakes were featured on the Food Network reality show Ace of Cakes from 2006 to 2011. He was entered into the Guinness Book of World Records in 2008 for baking the world's largest cupcake at 61.4 pounds and over a foot tall. 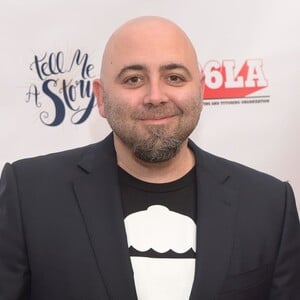