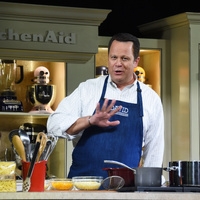 David Venable Net Worth and salary: David Venable is an American broadcast journalist, TV personality, and foodie who has a net worth of $1 million. David Venable earned his undergraduate degree in radio, television, and film from the University of North Carolina at Chapel Hill. He began working with various TV stations around the country, including WOAY-TV in West Virginia and WTAJ-TV in Pennsylvania. He hosted a weekly talk show on public affairs called Action Newsmakers and landed a job as the host of the Children's Miracle Network telethon for several years. Venable joined TV network QVC in 1993 in order to promote the company's gourmet food products. He hosts his own show, "In the Kitchen with David", and several other programs that air on the network. "In The Kitchen With David" airs twice a week on QVC with more than three million viewers and he occasionally hosts live online chats with his fans. Though Venable is not officially a chef, he's often viewed by QVC's audience as the company's go-to foodie. In the fall of 2012, he released his first cookbook, titled "In the Kitchen with David: Comfort Foods That Take You Home", with more than 100 recipes. The book had wildly successful sales, becoming one of the best-selling cookbooks ever put out by QVC.