David Chang is an American chef and entrepreneur who has a net worth of $20 million dollars. Chang is the founder of the Momofuku restaurant group which includes Momofuku Noodle Bar, Ma Peche, Momofuku Ssam Bar, Milk Bar, Momofuku Ko in New York City, Momofuku Seiobo in Sydney, Australia, and the Momofuku Toronto restaurants Nikai, Daisho, Shoto, and Momofuku Noodle Bar. Momofuku Ko was awarded two Michelin stars in 2009 that he still maintains today. Chang is known for his "bad-boy attitude" which includes no reservations and no vegetarian options.

David Chang was born in Washington, D.C. in August 1977 and grew up in Arlington, Virginia with two brothers and one sister. Chang's parents had immigrated from Korea as adults in the '60s, his mother from South Korea and his father from North Korea. His family owned a golfing goods warehouse and two restaurants. Growing up, Chang was a competitive golfer and participated in numerous junior tournaments. David studied at Georgetown Prep and Trinity College, majoring in religious studies. After graduating college, Chang held down a variety of jobs including teaching English in Japan and bussing tables in New York City. In 2000, he attended the French Culinary Institute in New York City, now known as The International Culinary Center.

While training at the FCI, he worked a small part-time job at Mercer Kitchen Manhattan and also worked a job answering phones at Tom Colicchio's Craft restaurant. Change stayed at Craft for two years before moving back to Japan to work at a small soba shop, after which he worked at a restaurant in Tokyo's Park Hyatt Hotel. When he returned to the U.S. he worked at Cafe Boulud where his idol, Chef Alex Lee, worked. However, Chang quickly became dissatisfied and frustrated at the fine dining scene.

It was 2004 when Chang opened his first restaurant, the famed Momofuku Noodle Bar in the East Village. His website states that momofuku means "lucky peach." The restaurant also shares a name with Momofuku Ando, the inventor of instant noodles. Chang opened his second restaurant in August 2006 a few blocks away, Momofuku Ssam Bar. It was just as successful and highly rated as his first. In March 2008, he opened Momofuku Ko, (which means "child of") a 12 seat restaurant that takes first-come-first-serve online-only reservations exactly ten days in advance. Soon after, Chang expanded Momofuku Ssam Bar into an adjacent space along with his colleague Christina Tosi who ran their pastry program. The new space was named Momofuku Milk Bar and it served soft-serve ice cream along with cookies, pies, cakes, and other treats, many of these inspired by foods Tosi had as a child. It was reported in 2009 that Momofuku Milk Bar's Crack Pie, Cereal Milk, and Compost cookies were in the process of being trademarked. Change and former New York Times food writer Peter Meehan published a highly anticipated cookbook called Momofuku in October 2009. The book contained a variety of detailed recipes and photos from Chang's restaurants. In May 2010, Chang opened Ma Peche in midtown Manhattan. 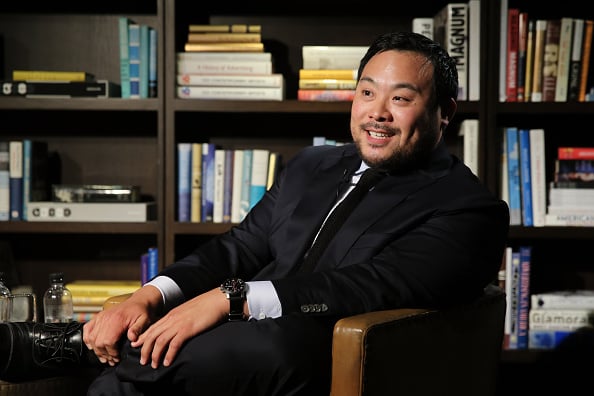 It was in November 2010 that Chang expanded internationally. He opened Momofuku Seiōbo in the redeveloped Star City Casino in Sydney, Australia in October 2011. The restaurant was another success and was awarded three hats from the Sydney Morning Herald Good Food Guide in its first year and was named Best New Restaurant. Chang's Lucky Peach food journal was created with Peter Meehan and published by McSweeney's starting in 2011. Riding off the success of his new international fame, Chang announced in March 2011 that he would be bringing Momofuku to Toronto. The restaurant opened in late March 2012, in a three-story glass cube in the heart of downtown Toronto. It was initially made up of three restaurants: Noodle Bar, Daisho, and Shoto, as well as a bar called Nikai. However, Daisho and Shoto unfortuantely closed in late 2017 and the space was refurbished. A new Momofuku restaurant named Kojin opened in the space in 2019.

In June 2015, Chang launched Fuku, a chain of fast-food restaurants specializing in fried chicken sandwiches. In 2016, Chang launched his first digital-only restaurant, offering a menu only for delivery in Midtown East and takes orders via an app named Ando. Later in 2016, Chang participated in a project by a Silicon Valley startup called Impossible Foods. The food he prepared was later added to the menu of one of his restaurants, Momofuku Nishi, as a partnership between Chang and Impossible Foods.

In May 2017, Chang announced the opening of a new restaurant at the Hudson Yards development in New York. January 2018 saw the opening of Chang's first West Coast restaurant in Los Angeles. Majordomo. After eight years, Ma Peche closed in June 2018. The show, which he created and produces, has been met with widespread rave reviews. In December 2019, Chang opened the 250-seat Majordomo Meat & Fish restaurant in The Palazzo tower of The Venetian Las Vegas. In response to the COVID-19 pandemic, in March 2020, the Momofuku restaurant group made the decision to temporarily close all its restaurants. Later that year, they consolidated some restaurants, and closed permanently Momofuku Nishi in Chelsea in Manhattan and Momofuku CCDC in Washington, D.C.

Chang appeared in 2010 in the fifth episode of Season One of HBO's "Treme," alongside fellow famous chefs Tom Colicchio, Eric Ripert, and Wylie Dufresne. His guest spot on the show was expanded in the second season when one of the characters, a chef from New Orleans who has moved to New York City, takes a job in his restaurant.

Chang has been a guest judge on Top Chef: All Stars and MasterChef Australia. In 2012 he launched the PBS series The Mind of a Chef, produced by Anthony Bourdain. In 2018, David Chang created, produced, and starred  in the Netflix series "Ugly Delicious." It was renewed for a second season in 2020. He's also appeared in another Netflix series titled "The Chef Show," produced by his friends Roy Choi and Jon Favreau. In 2019, Chang produced a Netflix original titled "Breakfast, Lunch, and Dinner" with guest stars including Kate McKinnon and Seth Rogen.

He was named to the 2010 list of Time 100 Most Influential people. He has been awarded and nominated for many James Beard Foundation Awards. In 2007 Chang was named Bon Appetit's and GQ's Chef of the Year.

Chang has been married to Grace Seo Chang since 2017. The couple welcomed a son, Hugo, in March 2019. 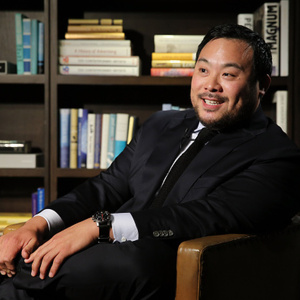