Dan Barber net worth: Dan Barber is an American chef, entrepreneur, and author who has a net worth of $6 million. Dan Barber was born in New York City, new York in 1969. He graduated from the French Culinary Institute and authored the book The Third Plate. Barber was named one of the Best New Chefs in 2002 by Food and Wine Magazine.

He won a James Beard Foundation award for Best Chef: New York City in 2006 and another in 2009 for Outstanding Chef. Barber was named the top chef in America by the James Beard Foundation in 2009 when he was also named one of the world's most influential people by Time Magazine in their Time 100. His writings have appeared in the New York Times and several other publications. He served on the President's Council on Physical Fitness , Sports, and Nutrition under President Barack Obama and is a member of the Advisory Board to the Harvard Medical School Center for Health and The Global Environment. Dan is married to author Aria Sloss. 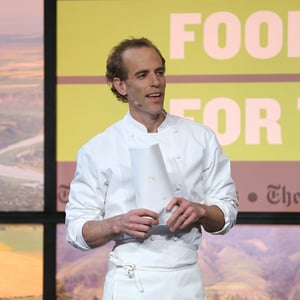