Colonel Sanders net worth: Colonel Sanders was an American businessman who had a net worth of $10 million at the time of his death (adjusted for inflation – his actual net worth was $3.5 million in 1980). He was best known for being the founder of Kentucky Fried Chicken (KFC).

Harland Sanders was born in Henryville, Indiana in September 1890 and passed away in December 1980. He also served as KFC's brand ambassador and symbol. He did not serve in the military but earned an honorary title of a Kentucky Colonel. He was born Harland Sanders and worked as a steam engine stoker, filing station operator, and insurance salesman. He founded KFC during the Great Depression and developed his secret recipe and method for cooking chicken in a pressure fryer. He focused on franchising his chicken throughout the U.S. In 1964 Sanders sold the company to investors for $2 million at 73 years old. That's the same as around $15 million today after adjusting for inflation. He stayed on as a brand ambassador and retained control of operations in Canada.

Harland Sanders died on December 16, 1980. He was 90 years old. At the time of his death, he was worth $3.5 million ($10.1 million inflation adjusted). Perhaps not as much as you'd guess considering the fact that today KFC's annual revenue tops $23 BILLION. 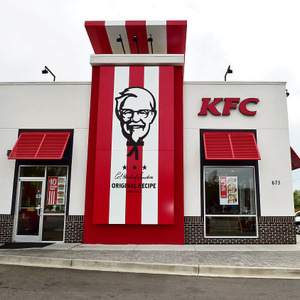