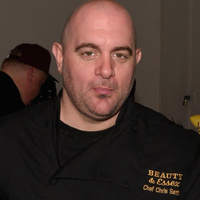 Chris Santos net worth: Chris Santos is an American chef, entrepreneur, and television personality who has a net worth of $8 million. Chris Santos was born in Fall River, Massachusetts in March 1971. He is the owner and executive chef of The Stanton Social, located in New York's Lower East Side. He studied at Johnson & Wales University and then moved to New York and worked as the executive chef at Time Café. He became the executive chef at Suba in 2003 and then at Mojo and was also the co-owner and executive chef at The Mexican Sandwich Company. Santos opened The Stanton Social in 2005 and Beauty & Essex in 2010. In 2016 he opened Vandal in Manhattan's Lower East Side. Santos is a recurring guest judge on the reality television series Chopped on the Food Network.