Cat Cora Net Worth: Cat Cora is a professional chef who has a net worth of $4 million. She is best known for appearing on "Iron Chef" and for co-hosting "Around the World in 80 Plates."

Cat Cora was born April 3, 1967 in Jackson, Mississippi. From a long line of chefs, Cora grew up in a family of restaurateurs in Jackson, Mississippi. She cites Julia Child, Barbara Tropp, M.F.K. Fisher and her own grandmother Alma as her inspirations. She enjoys blending Greek and Southern flavors when concocting recipes. She is a co-founder of Chefs for Humanity, an organization that brings together chefs and culinary professionals with the aim of providing emergency and humanitarian aid to address the issue of hunger all over the world.

She received her Bachelor of Science degree in Exercise Physiology and Biology from the University of Southern Mississippi and enrolled (and graduated) from the Culinary Institute of America in Hyde Park, New York. She has appeared on Simplify Your Life and also co-hosted the show Kitchen Accomplished on the Food Network. 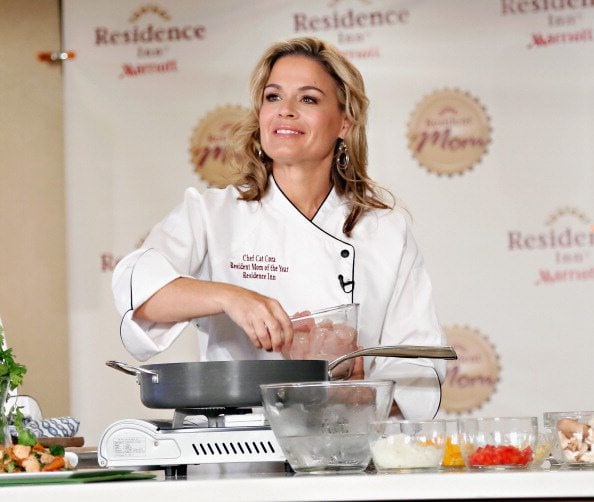 She is the only female chef in history to become a part of the franchise Iron Chef America: The Series. She shares the "wall of fame" in the Kitchen Stadium with other iron chefs Mario Batali, Bobby Flay and Masaharu Morimoto. She is assisted by Lorilynn Bauer and David Schimmel and her specialty is Greek and Aegean cuisine. She also hosted The Muppets Kitchen with Cat Cora, a web series where she cooks with the Muppets.

In 2011, she opened an eponymous bar and restaurant at the San Francisco International Airport. Cora opened The Ocean Restaurant at the S.E.A. Aquarium at Resorts World Sentosa off Singapore in February 2013. The 63-seat restaurant is inside the world's largest oceanarium and has stunning views of deep-sea wildlife from every table.