Amanda Freitag net worth: Amanda Freitag is an American chef and television personality who has a net worth of $3 million. Amanda Freitag was born in Cedar Grove, New Jersey in May 1972. She graduated from the Culinary Institute of America and worked under chef Jean-Georges Vongerichten at Vong New York.

In 1994 Freitag became a chef at Verbena. In 2003 she teamed up with Godfrey Polistina to start up the New York restaurant Cesca Enoteca & Trattoria. In 2012 Freitag was a guest on the television series Iron Chef America Countdown. From 2009 to 2012 she was featured on the TV series The Next Iron Chef. From 2010 to 2013 she starred in the series Unique Eats. Freitag has been a judge and contestant on the television series Chopped since 2009. In 2015 she has been the co-host of the TV series American Diner Revival along with Ty Pennington. 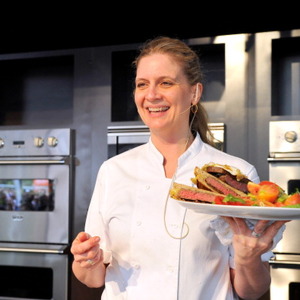