Alton Brown net worth: Alton Brown is an American celebrity chef, author, actor, and television personality who has a net worth of $13 million dollars. Alton Brown was a cinematographer for many music videos including R.E.M.'s "The One I Love". He graduated from the New England Culinary Institute in 1997.

He dislikes single-purpose utensils and equipment that he calls unitaskers in the kitchen. From 1998 to 2012 he starred in Good Eats which originally aired on PBS but was picked up by the Food Network. The show won a Peabody Award in 2006. He served as a commentator on Iron Chef America and The Next Iron Chef. His show Feasting on Asphalt looked at the history of eating on the move. It aired for two seasons and the third season was titled Feasting on Waves as he traveled the Caribbean Sea. In 2013 he hosted the show Cutthroat Kitchen. Brown has also appeared on The Next Food Network Star, and MythBusters. He launched "Alton Brown Live: The Edible Inevitable Tour" in 2013. He has done commercials for General Electric, Dannon, Welch's, Shun knives, and Heifer International. In 2013 he started the Alton Browncast podcast. Bon Appetit magazine named him "Cooking Teacher of the Year" in 2004 and he won the James Beard Foundation Award for Best TV Food Personality in 2011. 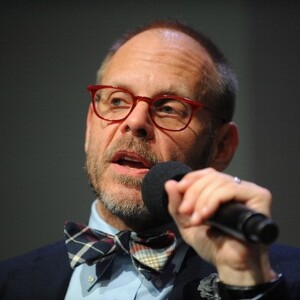