After many years at famed establishments such as Patina and La Butte Chaillot, she was hired to serve as the Executive Chef at Butter in New York City. She is also a chef at The Darby. She is most widely recognized for her appearances on multiple food-related television shows. She competed on "Iron Chef America" in 2007, and on "The Next Iron Chef" in 2011. She has also served as a judge for "Food Network Challenge", "Chopped", and "The Best Thing I Ever Ate". She is the star of her own series, "Alex's Day Off", and the 5th season of "The Next Iron Chef". 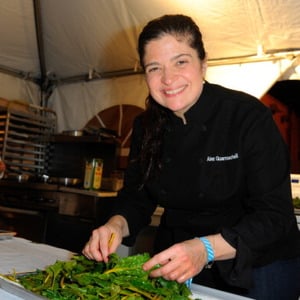