Aaron Sanchez net worth: Aaron Sanchez is an American chef, television personality, and entrepreneur who has a net worth of $4 million. Aaron Sanchez was born in El Paso, Texas in February 1976. Sanchez is part-owner of the Mexican restaurant Mestizo in Kansas City, Kansas. He appeared on Iron Chef America and had one of his battles end in a draw in season 2.

Sanchez also competed on The Next Iron Chef. He co-hosted the television series Heat Seekers with Roger Mooking and has been a frequent guest judge on the Food Network series Chopped. Sanchez has also been featured on the TV series Chefs vs. City with Chris Cosentino. Sanchez studied culinary arts at Johnson & Wales University in Providence, Rhode Island. He worked at Patria, Erizo Latino, Rose Pistola, L-Ray, and Paladar. Sanchez has also appeared on the TV series Melting Pot, Boy Meets Grill, Throwdown! with Bobby Flay, Aaron loves New York, and The Taste. He wrote the book La Comida del Barrio: Latin-American Cooking in the U.S.A. in 2003. 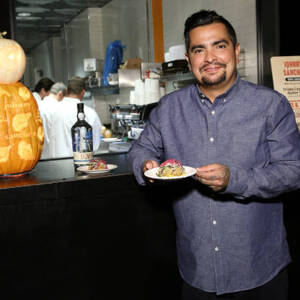