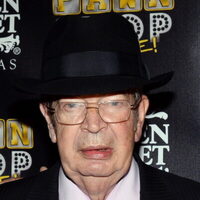 Richard "Old Man" Harrison Net Worth: Richard "Old Man" Harrison was an American pawn shop owner and reality television personality who had a net worth of $8 million dollars at the time of his death in 2018. He was famous for being one of the featured stars of the hit History channel reality series "Pawn Stars" (2009–2015). "Old Man" became known by his nickname when he was in his late 30s due to his appearance and general attitude. Richard opened the Gold & Silver Pawn Shop in Las Vegas, Nevada, with his son Rick in 1989, and as of 2010, he hadn't missed a day of work at the shop since 1994. "Pawn Stars" debuted in 2009, and less than three months later, it became the most-watched program on the History Channel, and it spawned the popular spin-off series, "American Restoration" in 2010. Harrison appeared in more than 270 episodes of "Pawn Stars."

Early Life: Richard "Old Man" Harrison was born Richard Benjamin Harrison Jr. on March 4, 1941, in Danville, Virginia. When Richard was very young, his family relocated to Lexington, North Carolina. He studied at Lexington High School but dropped out during his junior year, and at the age of 14, Harrison drove a school bus to help his family make ends meet. At age 17, Richard met his future wife, and just before they married, he was arrested for stealing a car. When given a choice between going to prison or joining the military, Harrison chose the military. He enlisted in the Navy and left in 1962, then re-enlisted the following year because he needed health care benefits to pay for his daughter's medical expenses. Richard spent two decades in the Navy, and after he was discharged, he worked at his wife's real estate firm until it closed in 1981.

Career: The Harrison family moved to Las Vegas in 1981, and Richard and Rick opened a 300 square foot store called Gold & Silver Coin Shop on Las Vegas Boulevard. They moved the shop to Fremont Street in 1986, and they began buying and selling second-hand goods in 1987. Two years later, Richard and Rick opened the Gold & Silver Pawn Shop on Las Vegas Boulevard South. The shop received its first taste of national fame after being featured on the Comedy Central show "Insomniac with Dave Attell" in 2003. Attell visited the shop while he was staying in Las Vegas and discovered that it was being run by a very unique cast of characters. After their episode of " Insomniac" aired, Rick began pounding the pavement with production studios to get a full time series pitched and sold. The show was eventually picked up by the History channel, which debuted the first episode of "Pawn Stars" in July of 2009. The series starred Richard, Rick, Rick's son Corey ("Big Hoss"), and Corey's friend Austin Russell ("Chumlee"), and after the show premiered, the shop's daily customer count increased from 70 to 700. By early 2012, the shop was getting between 3,000 and 5,000 visitors every day.

Personal Life: Richard married Joanne Rhue on July 7, 1959, and they remained together until his death in 2018. The couple had three sons, Joseph, Christopher, and Rick, and their first child, daughter Sherry, was born with Down syndrome and died at the age of 6. Harrison loved cars, and his son and grandson restored a 1966 Imperial Crown for Richard and Joanne's 50th wedding anniversary. He also owned a 1957 Chevy 150 that was a gift from the casts of "Counting Cars," "American Restoration," and "American Pickers."

In 2012, Richard and Rick were sued by Daniel Callahan for failing to provide "reasonable and necessary" security at Gold & Silver Coin Shop. The $20,000 lawsuit was filed because Callahan allegedly suffered injuries when he was "dragged out of the pawn shop and tossed onto the sidewalk" after getting into an argument over a rifle he was trying to sell. Harrison's grandson, Corey, stated that neither Richard or Rick had any direct contact with the complainant. Later that year, the Pawn Stars were sued by the Harrisons' former manager, Wayne F. Jefferies. Stating that he was instrumental in the launch of the series and was unjustly fired after the show premiered, Jeffries alleged that he was never paid the fees and merchandising royalties he was promised. He was reportedly fired after TMZ published a story about an upcoming spinoff, "Cajun Pawn Stars," that the cast had no knowledge of.

Death: Harrison suffered from Parkinson's disease, and he passed away on June 25, 2018, at the age of 77. He put Rick in charge of his estate and cut his youngest son, Christopher, out of the will after updating it a year prior to his death, writing "I would like to express my love and affection for Christopher Keith Harrison; however, for the purposes of this Will, I have intentionally and with full knowledge failed to provide for him and his issue." Besides his wife and sons, Richard was also survived by 10 grandchildren and five great-grandchildren. After Harrison's death, "Pawn Stars" honored him with an episode entitled "A Treasure Remembered."

Honors and Recognition: In March 2010, Las Vegas Mayor Oscar Goodman presented the Pawn Stars with a key to the city, and they showed their appreciation by giving him a set of collectible coins. In 2012, Harrison was awarded a key to his hometown by Lexington Mayor Clark Newell, and the Pawn Stars were grand marshals at the History 300 NASCAR race in Charlotte, North Carolina. July 17, 2012, was named "Pawn Stars/Gold & Silver Pawn Day" by the Clark County Commission, and Richard gave a $1,000 donation to the Clark County Museum. He also contributed to the museum's Senator McCarran display by lending them a Senate floor chair he used; the chair was sold to the pawn shop in a 2011 episode of "Pawn Stars."