Rich Eisen net worth and salary: Rich Eisen is an American TV journalist who has a net worth of $30 million. Rich Eisen is a television sports journalist on the NFL Network. Before this, he worked for ESPN. Additionally, he hosts his own daily sports radio show, "The Rich Eisen Show," which has video simulcasts on NBCSN and Peacock, and posts replays on YouTube.

Early Life and Career Beginnings: Rich Eisen was born in 1969 in Brooklyn, New York to a Jewish family, and was brought up on Staten Island. As a young adult, he went to the University of Michigan, where he was a co-sports editor of the school's Michigan Daily newspaper. In 1990, he graduated with a  Bachelor of Arts degree; subsequently, he enrolled at Northwestern University's Medill School of Journalism, from which he graduated with a Master of Science degree in 1994.

From 1990 to 1993, Eisen served as a staff writer for the daily newspaper the Staten Island Advance. Following this, he was a staff writer at the Chicago Tribune for a year. Eisen subsequently served as a reporter and sports anchor at KRCR-TV in Redding, California, a position he held from 1994 to 1996.

ESPN Broadcasting: In 1996, Eisen began working for ESPN as part of a duo with sportscaster Stuart Scott. During his time with the network, Eisen became known for his sense of humor, including his impression of Atlanta Braves broadcaster Skip Caray. Additionally, he hosted the first season of the ESPN reality series "Beg, Borrow & Deal," which featured two teams of four pitted against each other. The game required contestants to get from one point in the United States to another while completing sports-related tasks. Prohibited from using money, the players had to "beg, borrow, and deal" for everything from transportation to meals.

Among his other gigs, Eisen hosted Major League Baseball coverage for ESPN Radio, and served as a guest host on the sports radio talk shows "The Tony Kornheiser Show" and "The Dan Patrick Show." In 2001, he drew much attention for breaking the news of St. Louis baseball player Mark McGwire's retirement. Afterward, Eisen conducted an exclusive interview with McGwire discussing his decision.

NFL Network: In June of 2003, Eisen was the first on-air talent added to the roster of the newly established NFL Network. That November, he became the face of the 24/7 channel, which broadcasts on cable and satellite. He served as the main host of the network's flagship program, "NFL Total Access," until August of 2011, and also became the new host of "NFL GameDay Morning," the network's first pregame show. He maintains other hosting appointments on "NFL GameDay Highlights" and on the "Thursday Night Football" pregame, halftime, and postgame shows. Eisen also does special on-location coverage of various league events, including the NFL Draft, the NFL Scouting Combine, and the Super Bowl.

In 2010, Eisen took on another gig with the debut of "The Rich Eisen Podcast," the first podcast ever made for NFL.com. It features a wide variety of guests from sports and entertainment, who talk about football and current events. In 2012, Eisen hosted his first Thanksgiving Special for the NFL Network. 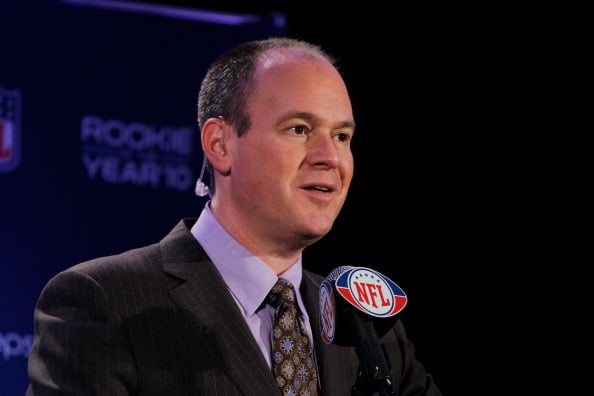 Other Endeavors: Beyond the NFL Network, Eisen has worked on a number of other networks and shows. In the summer of 2012, he began hosting the TNT reality competition television series "The Great Escape," which featured three two-person teams who must figure out how to escape locations such as Alcatraz, Preston Castle, and a Titan missile silo in Arizona. The show was canceled after nine episodes. Later, in 2014, Eisen took over from Jay Mohr on Fox Sports Radio's noon-to-3PM time slot. Also that year, Eisen launched his own sports-talk program, "The Rich Eisen Show," broadcast live from DirecTV's studios in El Segundo, California. In November of 2014, the show was picked up by Fox Sports Radio and broadcast daily. The show moved to YouTube in 2020, and shortly after was picked up by NBCSN and the Peacock streaming service.

From 2015 to 2017, Eisen made numerous appearances as himself on the CBS reboot of the sitcom "The Odd Couple." On the show, he portrayed the arch-rival of Oscar Madison, a fictional sports radio personality played by Matthew Perry. Additionally, Eisen has appeared on several episodes of the Comedy Central panel game show "@midnight with Chris Hardwick." In 2018, he had a gig co-hosting the Hallmark Channel's "The American Rescue Dog Show," alongside model and actress Rebecca Romijn.

Personal Life: In 2003, Eisen wed Emmy Award-winning sportscaster Suzy Shuster, who was formerly a college football sideline reporter for ESPN on ABC. Together, they have a daughter and two sons. For over a decade, they lived near Coldwater Canyon in Beverly Hills in a four-bedroom, three-and-a-half-bathroom house. The former residence of such stars as Bob Hope and Phyllis Diller, the home boasted a media room, an office, a wine cellar, and a formal living room. Outside, a swimming pool and spa were surrounded by a built-in barbecue, fire pit, and outdoor living area.

During the NFL Scouting Combine in 2005, Eisen was challenged by football star Terrell Davis to run in the 40-yard dash. Since that year, Eisen has continued to run the dash annually, with his best time being 5.94 seconds in 2016. More than just a fun activity, Eisen turned his annual run into a charitable campaign called #RunRichRun, which raises money for St. Jude Children's Research Hospital. 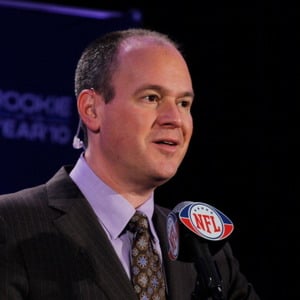