Early Life: Regis Philbin was born Regis Francis Xavier Philbin on August 25, 1931, in The Bronx, New York. He grew up in a Catholic household with mother Filomena and father Frank (a U.S. Marine), and he had a brother, also named Frank, who was 20 years younger than him and passed away from non-Hodgkin lymphoma in 2007. Regis studied at Our Lady of Solace and Cardinal Hayes High School, graduating in 1949. He attended the University of Notre Dame, where he played on the tennis team, and earned a degree in sociology in 1953. After college, Philbin joined the United States Navy, serving as a supply officer. He worked as a page on "The Tonight Show" in 1955, then wrote for talk show host Tom Duggan and ended up filling in when Duggan failed to show up one night. In 1962, Regis returned to "The Tonight Show," this time as an announcer.

Talk Show Career: In 1961, Philbin began hosting "The Regis Philbin Show" on San Diego's KOGO-TV, and it became nationally syndicated in 1964. From 1967 to 1969, he appeared on "The Joey Bishop Show" as Bishop's sidekick, and he co-hosted morning talk show "A.M. Los Angeles" from 1975 to 1981, bringing the show's dismal ratings up to #1. In the early 1970s, Regis spent his weekends in St. Louis, Missouri, appearing on KMOX-TV's "Regis Philbin's Saturday Night in St. Louis." In 1982, Philbin teamed up with former "A.M. Los Angeles" co-host Cyndy Garvey on WABC-TV's "The Morning Show." After Garvey left the show, Ann Abernathy briefly took her place, then Kathie Lee Johnson (who would later be known as Kathie Lee Gifford) took over the role in June 1985. In 1988, the show went into national syndication as "Live! with Regis and Kathie Lee," and after Gifford left in 2000, Philbin hosted with guest co-hosts until Kelly Ripa was named the new co-host in 2001. Regis announced his retirement from "Live! with Regis and Kelly" in January 2011, and the show devoted much of that season to celebrating his best moments from his 28 years as co-host. Philbin's last episode aired on November 18, 2011, and New York Mayor Michael Bloomberg made an appearance to give Regis a key to the city. 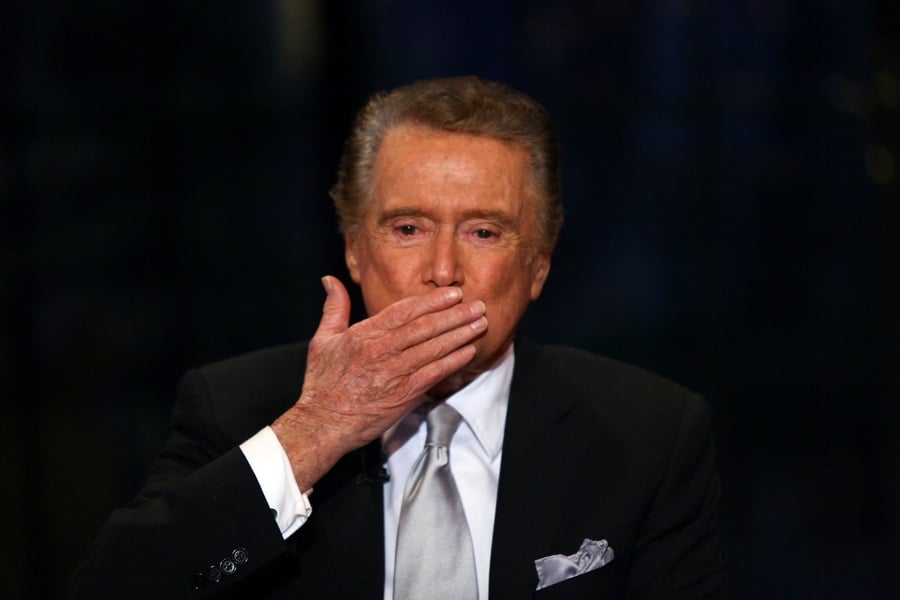 Game Show Career: In the mid-1970s, Philbin hosted ABC's "The Neighbors" and served as a field reporter on "Almost Anything Goes" (also on ABC). In 1999, he became the host of ABC's "Who Wants to Be a Millionaire," but it was canceled in 2002 and brought back as a syndicated series with new host Meredith Vieira. In 2004, the show came back to ABC with the new title "Who Wants to Be a Super Millionaire," and Regis took on hosting duties again. He won a Daytime Emmy for Outstanding Game Show Host in 2001, and "Time" magazine included him in their 2007 list "15 Best Game Show Hosts in History." In 2006, Philbin hosted NBC's "America's Got Talent," but after health problems and the cross-country commute became too much for him, Jerry Springer took over in 2007. Regis also hosted "Million Dollar Password" from 2008 to 2009, and he competed on "Celebrity Jeopardy!" in 1992, 1998, and 2006, winning $50,000 for Cardinal Hayes High School during his final appearance.

Personal Life: Regis married Catherine Faylen in 1955, and they had two children, Amy and Daniel, before ending their marriage in 1968. He went on to wed Joy Senese in 1970, and they have two daughters, Joanna and Jennifer. His son-in-law, Michael Schur, created "The Good Place," co-created "Parks and Recreation" and "Brooklyn Nine-Nine," and wrote for "The Office."

Philbin was a huge sports fan and supporter of the New York Yankees, Notre Dame Fighting Irish, Florida Marlins, and Pittsburgh Pirates. Regis underwent several medical procedures in later years, including a 2007 triple bypass surgery, a 2009 hip replacement surgery, and a 2010 surgery to remove a blood clot; also, in 1993, he had an angioplasty after suffering from chest pains while filming a commercial in Florida.

Awards and Honors: Philbin has earned 7 Daytime Emmys, including a Lifetime Achievement Award in 2008. In 2001, he won a TV Guide Award for Personality of the Year, and the following year, he was Grand Marshal of the Tournament of Roses Parade. Regis received a star on the Hollywood Walk of Fame in 2003, and in 2006, he was inducted into the National Association of Broadcasters Hall of Fame and the Television Hall of Fame. Philbin won the Walter Camp Distinguished American Award in 2003, and the Radio and Television News Association of Southern California gave him the Golden Mike's Broadcast Legend Award in 2010. In 2011, Regis received a Disney Legends Award, and in 2015, Trine University awarded Philbin an Honorary Doctor of Humane Letters. 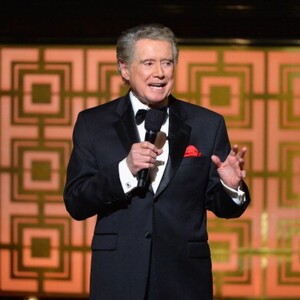