Preston Lacy, most famous for being a part of the TV show Jackass, has a net worth of $3 million. In addition to his net worth, he's achieved the respect of his peers that accompanies being part of a successful television and movie franchise. Lacy's specialty, as it were, is in sketches and comedy routines involving the famous "Wee Man," whose real name is Jason Acuña.

In these bits, Lacy would chase Wee Man through various public areas, often only dressed in white briefs and t-shirts. However, Lacy has done more in his career than chase a little person in his underwear on camera. In addition to contributing ideas to many stunts and routines on the Jackass TV show and films, Lacy has found work on both sides of the camera in feature films. He has a writing credit for the recent comedy film National Lampoon's TV: The Movie, and he appears on screen as former Saturday Night Live cast member Chris Kattan in the film Christmas in Wonderland. Unfortunately, Lacy has not been able to keep free of trouble in his personal life. In December of 2010, he was arrested for possession of marijuana and drug paraphernalia. If convicted, he could face up to two years in prison for the crime. 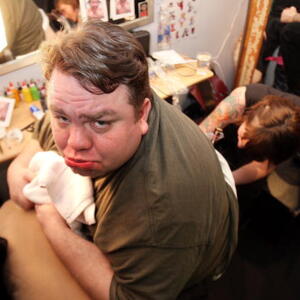