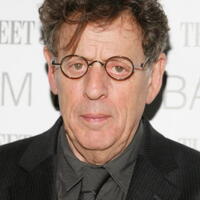 Philip Glass Net Worth: Philip Glass is an American composer who has a net worth of $35 million. Philip Glass was born January 31, 1937 in Baltimore, Maryland. He is considered one of the most influential creators of music of the late 20th century. Philip Glass is recognized as one of the most prominent composers associated with musical minimalism. His style is easily recognizable because of its use of repetition, particularly the repetition of small, distinctive, rhythmic and melodic cells, and its reliance on traditional diatonic harmonies. His later styles, since the '80s, embrace more than just minimalism and include a broad neo-Romanticism, with greater emphasis on melody and more complex harmonies. Glass showed early musical talent both on violin and flute. He graduated from the University of Chicago at the age of 19 where he studied math and philosophy before pursuing music at the Juilliard School in New York City. Glass became a prolific and widely respected composer. Some of his notable compositions include Einstein on the Beach, The Photographer and Koyaanisqatsi. After returning to New York in 1967, Glass struggled financially and worked as a cab driver and plumber while he developed his music. He established the Philip Glass Ensemble in the early '70s. This group consisted of seven players which included keyboards, woodwinds and amplified vocals and eventually became immensely popular both with fans of rock and the downtown classical scene. Glass' monumental opera Einstein on the Beach, a collaboration with theatre director Robert Wilson, was staged in 1976 and was his first large-scale triumph, culminating with performances at the Metropolitan Opera House. Three of Philip Glass' film scores have been nominated for Academy Awards. In an interview, Glass said Franz Schubert—with whom he shares a birthday—is his favorite composer.