Phil Ivey net worth: Phil Ivey is an American professional poker player who has a net worth of $100 million. Phil Ivey was born in Riverside, California, in 1976. His family moved to Roselle, New Jersey when he was just a baby. Phil Ivey is an eight time winner of the World Series of Poker, and has also won the World Poker Tour title. Ivey first became interested in online poker while working at a telemarketing firm, in New Jersey. He would play with his co-workers during breaks and after work.

He later moved on to the European Poker Masters, making it to the final table and winning seventh place with a cash prize of $12,538. He has also appeared on the NBC television show, Poker After Dark, where he walked away with $120,000, at the Winner Take All "Earphones Please" Tournament, but was defeated by Don Cheadle in the "National Heads Up Poker Championship." He has also appeared on GSN's High Stakes Poker. He played against Andy Beal, (a Texas Billionaire) in Limit Texas Hold'em, teaming up with other players that took turns playing against Andy Beal. They are a team of professional poker players, known as "The Group." After three days, Ivey won over $16 million. Ivey had a contract with the design team of Full Tilt Poker and filed a law suit claiming that they had breached that contract. Ivey wanted out of his contract and a settlement of $150,000,000, but later withdrew his complaint.

Phil Ivey is a big fan of NBA's Houston Rockets and L.A. Lakers, as well as the NFL's Buffalo Bills. But cheering on his favorites teams is only one of Ivey's hobbies. He also likes to partake in golf. He finished third in the inaugural World Series of Golf. He also enjoys video games, and making a few side bets, in his spare time. He has been known as "The Tiger Woods of Poker," as well as, "No Home Jerome," which was given to him in the early years of his poker playing.

Ivey also has a very charitable side, with generous donations to Empowered to Excel, (for underprivileged children,) and as co-founder, (with his mother, Pamela Simmons,) of the Budding Ivey Foundation. This foundation is in memory of his grandfather, Leonard (Bud) Simmons, and was created to give underprivileged children a chance at a good education. Ivey is also involved in programs to help feed the homeless. 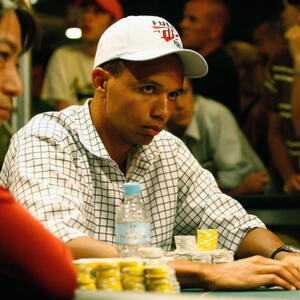