What is Phil Donahue's Net Worth and Salary?

Phil Donahue is an American producer, writer and TV host who has a net worth of $150 million. That is a combined net worth with his wife of several decades, actress/philanthropist Marlo Thomas.

Phil Donahue is probably best known as the host of the self-named "The Phil Donahue Show." Running for 29 years, the program is considered one of the most influential talk shows in TV history, being the first of its kind to include participation from the audience. On the show, Donahue focused on such loaded subjects as abortion, civil rights, and war, and frequently had as a guest politician Ralph Nader.

Phillip John Donahue was born in 1935 in Cleveland, Ohio to middle-class Irish Catholic parents. His mother, Catherine, was a shoe clerk at a department store, while his father, Phillip Sr., was a furniture sales clerk. Donahue attended Our Lady of Angels elementary school in Cleveland's West Park neighborhood, graduating in 1949. In 1953, he was part of the inaugural graduating class of St. Edward High School, a private all-boys Catholic preparatory school run by the Congregation of Holy Cross. Later, he enrolled at the University of Notre Dame, graduating in 1957 with a BA in Business Administration.

After his graduation, Donahue started his career as a production assistant at KYW radio and television. He did a short stint in Albuquerque, New Mexico sorting bank checks, then returned to broadcasting to become program director for WABJ radio in Adrian, Michigan. Following this, he did freelance journalism for "CBS Evening News," and was a morning anchor at WHIO-TV in Dayton, Ohio, where he conducted nationally-broadcast interviews with Jimmy Hoffa and Billie Sol Estes. In Dayton, he also hosted the afternoon talk show "Conversation Piece," and interviewed such major figures as John F. Kennedy, Malcolm X, and Jerry Rubin.

Upon leaving his position at WHIO-TV in 1967, Donahue launched "The Phil Donahue Show" on Dayton's WLWD television station. Although it originally only aired on affiliate stations of the Crosley Broadcasting Corporation, the program eventually entered into nationwide syndication. In 1974, the show moved from Dayton to Chicago, and then to New York City's 30 Rockefeller Plaza in 1985. Among its notable achievements, "The Phil Donahue Show" was the first national television program to feature breakdancing, helping to introduce hip-hop culture to the mainstream.

After a 29-year run and 26 years of syndication – comprising close to 7,000 daily shows – "The Phil Donahue Show" aired its final original episode in September of 1996. The program has the distinction of being the longest continuously running syndicated talk show in American TV history. Oprah Winfrey has since credited Donahue for the existence of her own successful daytime talk show. 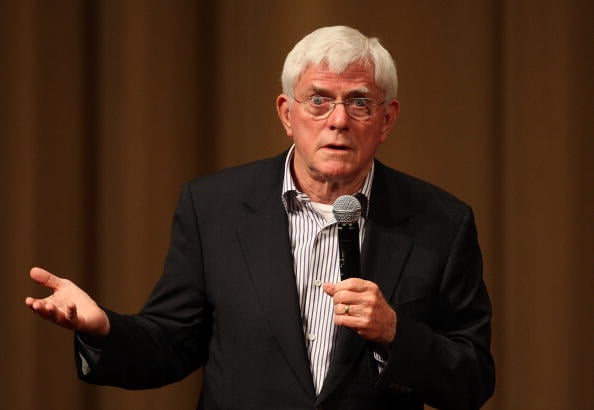 In the 1980s, Donahue partnered with Soviet journalist Vladimir Posner to cohost a series of televised conversations know as the "U.S.-Soviet Space Bridge." A groundbreaking event in the history of broadcasting, it featured Donahue hosting an audience in the US and Posner hosting one in the USSR, with members of the audiences invited to ask each other questions about their respective countries. In 1994, after the fall of the Soviet Union, Donahue and Posner re-teamed to cohost "Posner/Donahue," a weekly roundtable program that aired on CNBC. On top of these programs, Donahue appeared as a contributor on NBC's "The Today Show" from 1979 to 1988.

Following seven years of retirement, Donahue returned to TV in 2002 to host his eponymous show on MSNBC. The program was cancelled the next year, with a leaked MSNBC memo indicating that the company wanted Donahue fired for his anti-Iraq War position.

Beyond television, Donahue has also dipped his toe into the world of film. In 2006, he and independent filmmaker Ellen Spiro co-directed the feature documentary "Body of War," which recounted the story of a severely disabled Iraq War veteran and his attempts to adjust to life back home. The film won the People's Choice Award at the Toronto International Film Festival, and made the Oscar shortlist of 15 documentaries considered for a nomination.

Donahue and his show have been the recipients of numerous professional laurels. Over his broadcasting career, he won 20 Emmy Awards, ten of which were for Outstanding Talk Show Host and the other ten of which went to "The Phil Donahue Show" itself. In 1980, Donahue was bestowed with the prestigious Peabody Award, and in 1987, won the Planned Parenthood Federation's Margaret Sanger Award. In 1993, he was inducted into the Academy of Television Arts & Sciences Hall of Fame. Later, upon the ending of his show, Donahue made TV Guide's list of the 50 Greatest TV Stars of All Time.

In 1982, Phil signed an 8-year deal with his syndication company Multimedia Entertainment that guaranteed him $10 million in annual base salary. Phil was actually the largest shareholder in Multimedia Entertainment and earned additional annual dividends that brought his annual earnings to $20 million at his peak in the mid 1990s. Earning $20 million in the mid 1990s is the same as earning around $30 million per year today.

Phil was married Marge Cooney from 1958 to 1975. They had five children together. In 1977 actress/philanthropist Marlo appeared as a guest on Donahue. Marlo and Phil reportedly fell in love at first sight. They married in May 1980. She became stepmother to Phil's five children.

In 1986 Phil and Marlo bought a 17-room home in Westport Connecticut for an undisclosed price. In 1988 they paid just under $7 million for a 7-acre connected property. They sold the combined estate to a financier in 2006 for $25 million. That same year they bought a pair of side-by-side parcels right next to their former estate for an unknown amount. In 2012 they listed the roughly 6.5-acre property, which sites overlooking Long Island Sound and has grounds boasting a tennis court and a standalone gym, for sale for $27.5 million, ultimately accepting $20 million in 2013. Currently, they live in Manhattan.