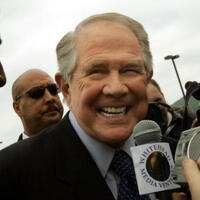 Pat Robertson net worth: Pat Robertson is an American businessman and Christian preacher who has a net worth of $100 million dollars. Born in Lexington, Virginia, Pat Robertson, also known as Marion Gordon Robertson, graduated from the McCallie School in Chattanooga, Tennessee, and went on to attend college at Washington and Lee University, and then served in the Marine Corps. After attending Yale Law School, and failing to pass the bar exam, he chose to attend New York Theological Seminary. Four years after graduating, he launched the Christian Broadcasting Network in Virginia, and the network is now broadcast in 180 countries. In the late 80s, he ran for President, but was unsuccessful. He runs a number of large companies, including the Christian Coalition, a Christian Right organization that exists to raise monetary and public support for conservative political candidates. He has made multiple predictions about the future of the United States based upon, "What God has told him", but so far, none of them have been accurate, though many have been quite controversial.