Nick Groff Net Worth: Nick Groff is an American ghost investigator, co-host and cameraman of Ghost Adventures who has a net worth of $1 million. Born Nicholas Groff on April 19, 1978 in California, he met his good friend and colleague Aaron Goodwin while he was studying film at the University of Nevada, Las Vegas. Upon graduation, he decided to investigate the paranormal and became a ghost hunter. Groff and Goodwin eventually met and teamed up with Zak Bagans and the trio started to film the Ghost Adventures, which first premiered on October 17, 2008 on the Travel Channel. The series allows the viewers to get acquainted with locations that are reported to be haunted. Whereas the show is introduced and narrated by Bagans, Groff also serves as its executive producer and editor. Furthermore, he is co-founder of the Ghost Adventures Crew (GAC). Aside from tracking and investigating ghosts, Nick Groff is a married man and a father of one child. The Groff family currently lives in Las Vegas, Nevada. 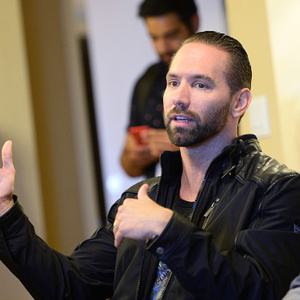