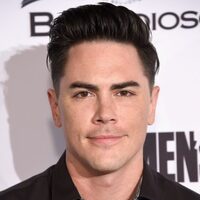 Tom Sandoval net worth and salary: Tom Sandoval is an American model, entrepreneur and reality star who has a net worth of $4 million. Tom Sandoval is probably most famous for being one of the cast members of Bravo's reality series Vanderpump Rules. The show originally followed the chaotic lives of six Los Angeles waiters and waitresses at a restaurant in West Hollywood, California called SUR. SUR is owned by Real Housewives of Beverly Hills star Lisa Vanderpump.

Tom Sandoval was the bartender at SUR for more than a decade. He was also notable for dating fellow cast member Kristen Doute. Today he dates fellow cast member Ariana Madix. On the show, Tom is portrayed as an unfaithful boyfriend, but in February 2014 it was revealed that Kristen may have cheated on Tom in the past. One of the main plot lines on the show has been whether or not Tom and Kristen will break up once and for all. Outside of reality TV Tom dreams of making it big as an actor or model but so far that hasn't happened outside of reality TV. He also plays guitar in a band called Pierce the Arrow. Sandoval is a native of St. Louis. He appeared in the 2008 film "Playing With Fire", the 2011 film "Behind Your Eyes", the 2010 film "Puppet Master: Axis of Evil" and the 2012 film "23 Minutes to Sunrise". In recent seasons of Vanderpump Rules, Tom has been followed as he opened a restaurant (under the umbrella of mentor Lisa) with his best friend Tom Schwartz. The grand opening of their restaurant, TomTom Bar, was filmed as part of a Vanderpump episode that aired in February 2019.

Real Estate: In February 2019, Tom shelled out $2.07 million for a house in the LA suburb of Valley Village.