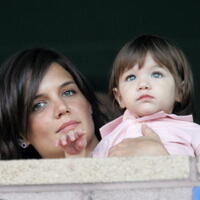 Suri Cruise Net Worth: Suri Cruise is the daughter of actors Tom Cruise and Katie Holmes. She was born in April 18, 2006 at St. Johns Hospital in Santa Monica, California, USA. When TomKat announced Katie´s pregnancy in October 2005, the whole media went frenetic into details surrounding the not-yet-born celebrity child. After her birth, Suri was kept from the public eye by her parents who just added more to the frenzy. Pictures of her finally went public in October 2006 when she appeared with her parents on the cover of Vanity Fair. Since then, Suri has been photographed many many times, usually eating ice cream or shopping with her mother. She is known as a developing fashionista, especially after her impressive shoe collection when she was only five. It is apparent that her favorite color is pink, based on the apparel she is usually seen wearing. Her parents being divorced, Katie holds primary physical custody of Suri, with occasional time spent with her father Tom. Tom and Suri have been seen together spending father-daughter time while traveling around the world. It is only expected that Suri, being surrounded in such environment, will become an actress herself. Tom Cruise has expressed that there is no pressure for such thing to happen although it is very likely. Her celebrity father plus all the media coverage surrounding her mom's pregnancy, birth, and mysterious first months (which even posed some doubts about her actual existence) turn her into an always attractive asset to paparazzi coverage. A likeness of Suri Cruise appeared in an episode of the TV series Family Guy.