Stephanie Beacham net worth: Stephanie Beacham is an English actress who has a net worth of $25 million. Stephanie Beacham was born in Barnet, Hertfordshire, England in February 1947. She studied mime with Etienne Decroux in Paris, France, and attended the Royal Academy of Dramatic Art in London. Her first screen role came in 1967 on the BBC series The Queen's Traitor. She made appearances in the shows The Saint, Callan, and UFO. Her first film roles came in The Games and Tam Lin. In 1971 she starred opposite Marlon Brandon in The Nightcomers and appeared nude in a scene. She starred in many horror films including Dracula AD 1972, And Now the Screaming Stars, House of Mortal Sin, Schizo, and Inseminoid. She was featured in the BBC series Tenko and the drama series Connie. One of her best known roles was as Sable Colby on The Colbys from 1985 to 1987. The show was a spin-off of Dynasty. Beacham's most popular recent roles include playing Phyllida Oswyn in Bad Girls from 2003 to 2006 and as Martha Fraser in Coronation Street in 2009. She was a housemate in 2010 on Channel 4's Celebrity Big Brother. She helped launch the Sense-National Deafblind and Rubella Association Fill in the Gaps campaign. She was nominated for a Golden Globe in 1990 and has been nominated for three Soap Opera Digest Awards. She has two daughters from her previous marriage to John McEnery. 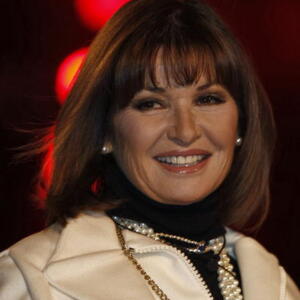