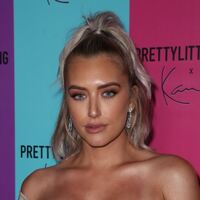 Anastasia "Stassie" Karanikolaou was born in Los Angeles, California in June 1997. She is known for her Instagram account stassiebaby where she has more than nine million followers. Stassie met Kylie at a bookstore and once lived together. Stassie Karanikolaou is also known for her YouTube channel. The best friends got matching tattoos in 2019 at Travis Scott's birthday party. Stassie has dated social media personalities Zane Hijazi and Sam Wilkinson. She also dated Tyler Cameron from The Bachelorette and has been linked to Noah Centineo. She has appeared in magazines including Teen Vogue and modeled for Good American and Pretty Little Thing. She created her own swimwear line with TJ Swim in 2019. She earns money from Instagram and YouTube.