Sofia Richie net worth and salary: Sofia Richie is an American model and fashion designer who has a net worth of $8 million. She has been featured in campaigns by a number of major fashion brands. She is best known for dating "Keeping Up with the Kardashians'" star Scott Disick.

Early Life: Sofia Richie was born on August 24, 1998, in Los Angeles, California. She is the daughter of  Lionel Richie and Diana Alexander Richie. Sofia is the younger sister of Miles Richie and Nicole Richie. Her godfather was Michael Jackson. She became close to Paris Jackson growing up and visiting Neverland Ranch. She learned to sing at age five and play piano at age seven. She took vocal lessons when she was 14. She also worked in the studio with her brother-in-law, Good Charlotte frontman Joel Madden. Richie attended Oaks Christian School before being homeschooled for a few years while her dad was on tour.

Career: Sofia began her modeling career at age 14 in "Teen Vogue." At 15, she landed her first fashion contract with the swimwear company Mary Grace Swim. In 2015, she appeared in editorials in several magazines and for a number of brands including "Elle Girl," "Nylon," and Love Culture. She made her runway debut at the annual Go Red For Women Red Dress Collection Fashion show at New York Fashion Week in February 2016. In the time since then, Richie has appeared in fashion shows for a number of brands including Chanel, Yeezy, and Dolce & Gabbana. She has also appeared in several ad campaigns and magazine editorials.

In July 2019, Richie released a line of colorful swimwear with Frankie's Bikinis. Her collection featured tie-dye, neon colors, and bright floral patterns. In the fall of 2019, she designed a clothing line for UK-based store Missguided called Sofia Richie x Missguided. The collection had 60 pieces, all priced between $20 and $100, and included mini dresses, tailored pieces, and classic coordinating sets.

Personal Life: Sofia was once romantically linked to Justin Bieber. She dated Kourtney Kardashian's former boyfriend Scott Disick from 2017 to August 2020.  He is 19 years older than Sofia and has three children with Kardashian, all of whom are closer in age to Sofia than Disick is.

After she split from Disick, Richie was spotted out and about with Matthew Morton. Morton, 27, is the son of Hard Rock Cafe founder Peter Morton and brother of the late Harry Morton. He owns the tea shop Cha Cha Matcha in Beverly Hills. Morton was previously linked to model Bella Hadid.

Rumors circulated that she dated friend Jaden Smith after her split from Disick. However, the two are lifelong friends and, according to them, just "homies."

Richie has a daschund named Hershula.

Real Estate: In the fall of 2019 it was reported that Scott Disick and Sofia Richie were planning to move in together. While house hunting, the couple toured a $19.9 million, 12,000 square foot mansion in Malibu. The home formerly belonged to actor Kelsey Grammar and boasts ocean views,  four bedrooms, six bathrooms, a grand ballroom, a pond, a swimming pool, a gazebo, and two tennis courts to boot.

Richie lives in a modern mansion in the Hollywood Hills that has its own swimming pool. 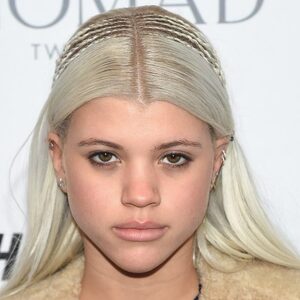