Shaun Ross net worth: Shaun Ross is an American model, recording artist, and actor who has a net worth of $2 million. He is perhaps best known for being the first professional male model with albinism.

Shaun Ross was born in New York City, New York in May 1991. He has worked for fashion designers, campaigns, and magazines including Givenchy, Vogue, Alexander McQueen, Nylon, GQ, and more. He has appeared in music videos including Katy Perry's "E.T.", Beyoncé's "Pretty Hurts", and Lana Del Rey's short film Tropico. As a recording artist he released his debut single Symmetry" featuring Lizzo. He is of African-American descent and has the congenital disorder albinism. As an actor Shaun Ross has appeared in the films The Skinny and Perfect and in episodes of the TV series The Man in the High Castle and American Horror Story as well as on the television series Fashion News Live. 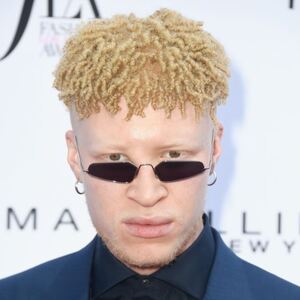