Selita Ebanks Net North: Selita Ebanks is a Cayman-born British fashion model and actress who has a net worth of $12 million. Selita Ebanks was born February 13, 1983 in George Town Cayman, Cayman Islands. Ebanks has worked for high fashion brands Neiman Marcus and Ralph Lauren, and appeared in magazines such as the Sports Illustrated Swimsuit Issue, Vogue and Glamour, but she is best known for her work with Victoria's Secret, as one of the brand's "Angels" from 2005 to early 2009.

Ebanks has also made guest appearances on episodes of Still Standing (CBS 2002-06) and South Beach (UPN 2006). In 2007, she was named one of People magazine's Most Beautiful People during the time she was featured in the Sports Illustrated Swimsuit Issue in 2007 and 2008. Also that year, she appeared with fellow Victoria's Secret models Heidi Klum, Adriana Lima, Marisa Miller, Alessandra Ambrosio and Miranda Kerr as themselves on an episode of How I Met Your Mother. Ebanks made a bit of tabloid news when she became engaged to actor-rapper-comedian Nick Cannon after the two started dating in February 2007. Cannon made a public proposal to the supermodel, asking her via the jumbotron in New York's Times Square. But five months later, the couple called off their engagement. Meanwhile, Ebanks remained heavily involved in various philanthropic efforts, like supporting women's educational and professional programs in war-torn Africa, as well as New York's Foster Care system, while helping consult with families affected by HIV/AIDS. Meanwhile, she was one of 14 celebrities competing against each other for their favorite charities on the third season of Celebrity Apprentice. 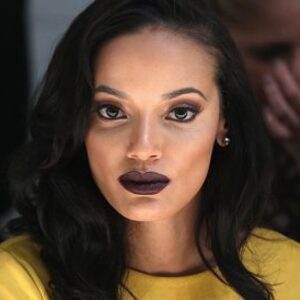