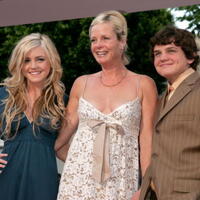 Rebecca Broussard net worth: Rebecca Broussard is an American actress and model who has a net worth of $10 million dollars. Rebecca Broussard was born in Louisville, Kentucky and went on to attend the University of Louisville. She began her professional career as a model, and relocated to California. Once in California, she also worked as a cocktail waitress at Helena's Hollywood Nightclub. She began her professional acting career in the late 80s, and went on to appear in such projects as "Die Hard", "The Two Jakes", "Man Trouble", "Blue Champagne", "French Exit", "The Point of Betrayal", "Mars Attacks!", "Cannes Man", "Spanish Fly", "Ringmaster", "Inside". She also voiced Sylvia Linsky in the videogame, "Tex Murphy: Overseer". She was in a relationship with Jack Nicholson throughout the early 90s. They had two children together, Lorraine Nicholson and Raymond Nicholson, before parting company. Lorraine Nicholson has gone on to follow in her parent's footsteps, and is a working actor and director.