Rachel Hunter Net Worth: Rachel Hunter is a New Zealand model, actress, and reality television show host who has a net worth of $60 million. Over the years, Hunter has become a household name in the fashion industry, and she has also ventured into other forms of entertainment work. In addition to appearing on a wide range of magazine covers, Rachel is famous for hosting "Rachel Hunter's Tour of Beauty" on Imagination Television.

Hunter has also been quite successful in the acting world, and she has appeared in a number of television and film projects. In addition, she is known for her involvement in reality TV. Rachel had a year-long stint as a judge on "New Zealand's Got Talent," and she also in a celebrity episode of "Lingo."

Early Life: Rachel Hunter was born on September 9th of 1969 in Glenfield, Auckland. When she was still quite young, her parents divorced. One of Rachel's earliest ambitions was to become a dancer, and she studied ballet throughout her childhood. However, she was eventually diagnosed with a rare blood disease, and this made it impossible for her to pursue her dancing dreams.

Hunter describes her childhood self as a "shy, inward kid," and her struggle with health issues caused her to miss months of her final years at high school. During this period, she worked at a local ice cream parlor. Her mother was the first one who suggested that she try modeling, as she could see that Hunter's confidence was suffering because of her failed dancing ambitions.

Rachel states that she started to take her modeling career seriously when she was approached on the beach by a photographer who wanted to take pictures of her. Although she rolled her eyes at him, she eventually agreed and started attending modeling school. Hunter then started doing modeling jobs in New Zealand before returning to school at the age of 17, after she had recovered from her illness.

It was at this point that she received a phone call from her mother, who said "Rachel, New York wants to see you." With a promising modeling career ahead of her, she accepted a contract in New York and relocated to the Big Apple at the age of 17.

Career: Mentored by Eileen Ford of Ford Models, Rachel immediately started booking work as a model in New York. Prior to her move to New York, she had already become quite established as a 16-year-old with jobs in New Zealand, Australia, and even France. At a young age, she became the face of Tip Top Ice Cream. However, her career really started to take off once she arrived in the United States.

After booking a contract with Cover Girl, she began appearing on a wide range of magazine covers, including "Italian Vogue," "Australian Vogue," "Cosmopolitan," "Elle," and many others. She truly rose to the top of the modeling world after appearing as a swimsuit model in a 1989 issue of "Sports Illustrated." Hunter later appeared on the cover of the swimsuit issue of "Sports Illustrated" twice. She also gained notoriety after posing nude for "Playboy" in 2004. Hunter is still signed to Ford Models to this day.

Outside of modeling, Hunter has racked up a few notable acting credits. In 1997, she appeared as herself on "The Drew Carey Show." In 2006, Stacey appeared briefly in "The Benchwarmers." Her other films roles were in movies like "Confessions of a Go-Go Girl," "The Perfect Assistant," and "Piranhaconda."

After judging "New Zealand's Got Talent" frm 2012 to 2013, Hunter began hosting her own TV series called "Rachel Hunter's Tour of Beauty." The show explores different concepts of beauty throughout the world. Many music fans may know her from the Fountains of Wayne music video for "Stacy's Mom," in which she played the song's main subject. In addition, she has appeared in a range of independent films.

Relationships: In the late 80s, Hunter was in a relationship with high-profile rock musician Kip Winger, but she eventually left him to begin dating another musician, Rod Stewart. When Rachel met Stewart at the age of 21, Rod was 24 years older than her. The pair first ran into each other at a nightclub in LA, and they married just three months later in Beverly Hills. After their marriage in 1990, Hunter and Stewart had two children together before divorcing in 2006.

While she was going through her separation with Rod, Rachel began dating Sean Avery, a Canadian hockey player. After a few years of dating Avery, she moved on to another Canadian hockey player and Stanley Cup winner named Jarret Stoll. Rachel is 13 years older than Stoll. Eventually, Jarret proposed to Hunter in 2008. Although they were scheduled to get married in New Zealand in 2009, the pair called off the wedding just 7 weeks before the big day.

Real Estate: In 2020, Hunter sold a home in Hollywood Hills for $3.45 million. She had been trying to sell this property for over three years, and it was listed and re-listed several times before she finally found a buyer. Back in 2016, the property was listed for as much as $5 million. With that said, Rachel still managed to rake in a sizable profit, as she originally purchased the home back in 2004 for just $2.425 million. This was just after her split from Ron Stewart.

Selling this home was a bit of a struggle for Hunter, and at one point she even played with the idea of renting it out instead of selling it. Rental fees ranged from $15,000 to $20,000 over the years. Not far from Laurel Canyon, this residence lies on the foothills just above the Sunset Strip. Spanning approximately 4,500 square feet, the home features wood-beamed ceilings, French doors, and five bedrooms. Outside, there is a flagstone-lined pool and spa.

In addition, Hunter once owned  traditionally-styled home in the affluent area of Hermosa Beach in Los Angeles. She purchased this residence with her former fiancee, Jarret Stoll, for $3.65 million in 2007, although Stoll retained sole ownership after their split (they never wed). In 2004, she sold a 6,000-square-foot, Mediterranean-style property in Sherman Oaks for $2.55 million. 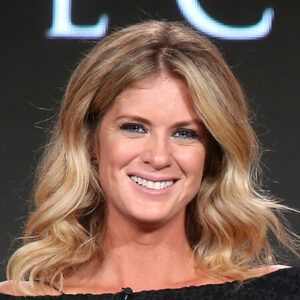