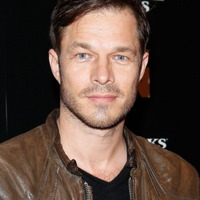 Paul Sculfor net worth: Paul Sculfor is a British model and actor who has a net worth of $9 million. Paul Sculfor was born in Upminster, England, United Kingdom in February 1971. He has modeled for several campaigns including Patrick Cox, Louis Vuitton, Aramis, Esquire, Levi's, Lynx, Next, Landrover, and Louis Vuitton. Sculfor has appeared on the covers of many magazines including Attitude, Fantastic Man, and Out Magazine. As an actor he starred in the TV mini-series 5 Aside in 2014. Sculfor has also starred in the films Baseline, Psychosis, and Di Di Hollywood. He appeared on the television series Britain's Next Top Model as a judge. Paul has had many celebrity girlfriends including Jennifer Aniston, Lisa Snowdon, and Cameron Diaz.