Olga Kurylenko net worth: Olga Kurylenko is an actress and model who has a net worth of $18 million dollars. Born November 14, 1979 in Berdyansk, Ukraine, Olga Kurylenko was discovered as a model at the age of 13 and moved from Ukraine to Paris, France at the age of 16 to pursue a modeling career, but is more widely known for her role as 'Bond girl' Camille Montes in the 22nd James Bond film 'Quantum of Solace' (2008). Her more recent film roles include a part in Terrence Malick's 'The Wonder' (2012) and opposite Tom Cruise in 'Oblivion' (2013). She also appeared on the magazine covers of Vogue and Elle at the age of 18 and subsequently landed the covers of such magazines as Madame Figaro, Marie Claire and Maxim. Kurylenko went on to become the face of the popular brands Bebe, Clarins and Helena Rubinstein. She modeled for Roberto Cavalli and Kenzo and also appeared in the Victoria's Secret catalog. Her first acting appearance was for singer Seal's single Love's Divine in 2003, but her film career actually began in France during 2005. Kurylenko became a citizen of France in 2001, just one year after marrying French fashion photographer Cedric van Mol. The couple divorced four years later and she married American mobile phone accessory entrepreneur Damian Gabrielle in 2006. The second marriage also ended in divorce. She moved to London in 2009. Kurylenko is noted for her work with the underprivileged, with an emphasis on children in her native Ukraine. 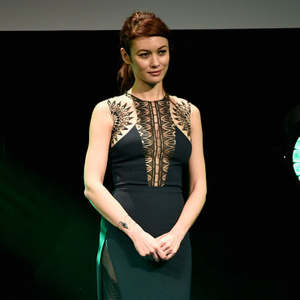