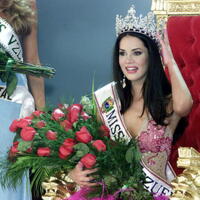 Mónica Spear Net Worth: Mónica Spear was a Venezuelan beauty queen, model and telenovela actress who had a net worth of $300 thousand. Mónica Spear Mootz (best known as Mónica Spear) was born October 1, 1984 in Maracaibo, Venezuela. She won the beauty queen title of Miss Venezuela in 2004 and came in fourth in 2005's Miss Universe pageant. She then began acting in soap operas in Venezuela. Mónica Spear is the cousin of Venezuelan model Jossie Nikita Marques Spear. Mónica Spear married Thomas Henry Berry and together they had a daughter. In 2013, they split but remained friendly. Spear became one of the most successful actresses in Venezuela for her main roles in soap operas. Her first role as a protagonist was in the RCTV soap opera Mi Prima Ciela (My Cousin Ciela), in which she played a high-school student battling leukemia. The show was a success in Venezuela and other parts of South America and was televised in the U.S. as well. Spear also held the starring role in Venevisión's soap opera La Mujer Perfecta in 2010 and carried a lead role in Flor Salvaje, a Spanish-language telenovela produced by the Miami-based television network. On January 6, 2014, Spear was in her native Venezuela on vacation with her ex-husband and their five-year-old daughter. On a highway in central Carabobo, when the three were inside their car waiting for assistance after the vehicle had broken down, Mónica Spear and her ex-husband were killed during an attempted robbery and their daughter was shot and wounded in the leg. It was theorized that the thieves tried to rob them and the couple resisted.