Molly Sims net worth and salary: Molly Sims is an American actress and model who has a net worth of $20 million dollars. Molly Sims got her start by appearing in Sports Illustrated's swimsuit edition magazines, and appearing in Las Vegas, a drama series on NBC. Sims was born in May of 1973 in Kentucky, to Dottie and James.

After graduating from high school, she went on to attend Vanderbilt University, but dropped out in 1993, at the age of 19, to pursue a career in modeling. While in college, Sims was also a member of the Delta Delta Delta sorority. Since gaining notoriety within the modeling industry, Sims took on a number of prominent roles. She was the spokesperson for Old Navy clothing, appeared in MTV's House of Style, has served as a model for CoverGirl. She also appeared in Sports Illustrated's coveted suimsuit edition from 2000 to 2002, and in 2004 and 2006. Sims has also helped create a jewelry line, Grayce, which was sold on the Home Shopping Network. Other on-screen roles include parts in The Benchwarmers, Yes Man, The Pink Panther 2, and Fired Up. Since 2001, she has been married to film producer Scott Stuber. The couple has a son, Brooks, who was born in June of 2012. 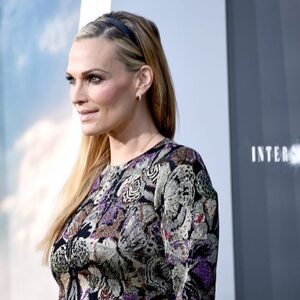