Michelle Hunziker Net Worth: Michelle Hunziker is an Italian-Swiss actress, musician, model, and TV host who has a net worth of $10 million. Born in Sorengo, Switzerland, in 1977, Michelle Hunziker decided to pursue modeling after she moved to Milan, Italy with her mother. She landed an agent and began working with famed brands such as La Perla, Rocco Barocco, and Armani.

Hunziker faced backlash from some in the industry who claimed she was too short and fat to model successfully. In 1990, she began hosting the TV series "Paperissima Sprint". Two years later, she was the co-host of "Scherzi a parte". In 1996, Hunziker appeared in an episode of "I misteri di Cascina Vianello". She also appeared on "La forza dell'amore" and "Voglio stare sotto al letto" before becoming the host of "Erstes Gluck" in 2000. She starred in 2004's "Love Bugs". Her other recent TV and film credits include "Ancient Warriors", "Natale in crociera", "Natale a Rio", and "Christmas in Beverly Hills". Hunziker has appeared in several musicals, including "Cabaret" and "The Sound of Music" in Italy. She hosted the popular Festival di Sanremo in 2007, an Italian singing competition. In 1998, Hunziker married famous Italian singer Eros Ramazzotti. They had one child together before their 2002 separation and 2009 divorce. Hunziker is now with her partner Tomaso Trussardi, with whom she has a daughter. 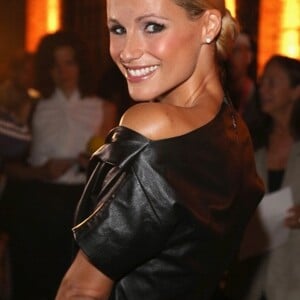