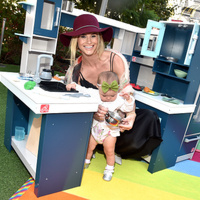 Meghan King Edmonds net worth: Meghan King Edmonds is a model and reality television star who has a net worth of $5 million. She is best known for appearing on the hit Bravo reality series, Real Housewives of Orange County, and for being the wife of Fox Sports Announcer and former St. Louis Cardinals player, Jim Edmonds. Meghan is friends with Heather Dubrow and reportedly lives close to both Heather and Shannon in Orange County. She originally hails from St Louis, Missouri and comes from a family of high-achievers. Her sister is professional soccer player, Julie King, and her brother is a model who has appeared several times on the cover of Vogue Italia. Edmonds and her husband, Jim, were married in October of 2014, so the couple were newlyweds during the filming of her first season of Real Housewives of Orange County. The former model is Jim's third wife and he has three children from his previous relationships. Jim often travels for work as he commutes back and forth to St. Louis for his broadcasting gig, while Meghan remains in the OC to play stepmom and find her place in OC society.