Megan Hauserman net worth: Megan Hauserman is an American model and television personality who has a net worth of $150 thousand. Megan Hauserman was born in Chicago, Illinois in November 1981. Megan was the Playboy Cyber Girl of the Week in February 2006. She has also worked with Bench Warmer International and posted for Guitar World magazine. In 2007 she won the VH1 reality series Beauty and the Geek and won $125,000. She appeared on VH1 reality series Rock of Love with Bret Michaels in 2008 and finished in fifth place. She next appeared on the VH1 reality show I Love Money in 2008. She finished in third place before quitting the competition. From 2008 to 2009 she was a contestant on Rock of Love: Charm School and finished in tenth place. She filed a lawsuit against Sharon Osbourne after Sharon pulled out Megan's hair. Megan got her own VH1 reality show Megan Wants a Millionaire in 2009 but the show was cancelled after three episodes due to one of the contestants being a suspect in a murder. Hauserman starred in episodes of the series Beach Heat Miami and Badass! in 2010. In 2010 she was arrested for DUI and announced her engagement to Anthony Scirpoli. The couple married in 2011. 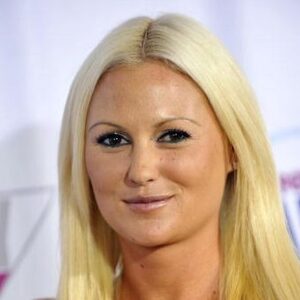