Lydia Hearst-Shaw Net Worth: Lydia Hearst-Shaw is an American actress, model and writer who has a net worth of $100 million dollars. Born in Wilton, Connecticut, in 1984, Lydia Hearst studied communications and technology at Sacred Heart University until she broke into the fashion industry in the early 2000s. She appeared on "Vogue Italia" in 2004 as the cover model and has gone on to work with dozens of international brands, including Chanel, Fendi, Nicole Miller and Jeremy Scott. The 2008 Supermodel of the Year at the Michael Awards has been in ads for Prada, Louis Vuitton, MAC Cosmetics, DKNY and Alexander McQueen. She penned columns in "Page Six" magazine before it was axed and now writes for lovelydiahearst.com where she blogs about fashion and lifestyle. Hearst has had several TV and film appearances, including credits on "Mistresses", "Two Jacks", "Delirium", "Automobile Waltz", "Trigger", "Desire", "Condemned", "Cabin Fever: Patient Zero", "Velvet Morning", and "Gossip Girl". She appeared in music videos for Miles Fischer, Cisco Adler and Johnny Polygon, and is part of reality show "The Face". Hearst is the heir to the fortune of publishing giant William Randolph Hearst. She is a Smile Ambassador for Operation Smile and won a Catwalk For Charity Humanitarian Award. 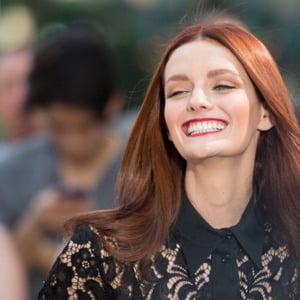