Liya Kebede net worth: Liya Kebede is an Ethiopian model, actress, health advocate, and clothing designer who has a net worth of $18 million dollars. Liya Kebede was born in Addis Ababa, Ethiopia in March 1978. She attended Lycee Guebre Mariam where a film directed spotted her. Liya moved to France and worked through a Parisian agency. She later moved to New York City. Kebede got a big in 2000 when Tom Ford asked her for an exclusive contract for the Gucci Fall/Winter fashion show. She was featured on the cover of Paris Vogue for the May 2002 edition, and the entire issue was dedicated to her. She has appeared on the cover of vogue for their American, Italian, French, Japanese, and Spanish versions. She has been in advertisements for Gap, Yves Saint-Laurent, Victoria's Secret, Tommy Hilfiger, Revlon, Louis Vuitton, and Dolce & Gabbana. In 2003 she became the first Ethiopian to become the face of Estee Lauder cosmetics. She was named by Forbes as the 11th highest earning supermodel in 2007, at $2.5 million. She launched her clothing line Lemlem in 2008. As an actress she has appeared in Lord of War, The Good Shepherd, Desert Flower, Day of the Falcon, Capital, Deception, Innocence, and The Being Experience. Kebede won the Chopard Trophy at the 2010 Cannes Film Festival. In 2013 she was one of Glamour magazine's Women of the Year for her philanthropic works. She married Kassy Kebede in 2000 and they have two children together. 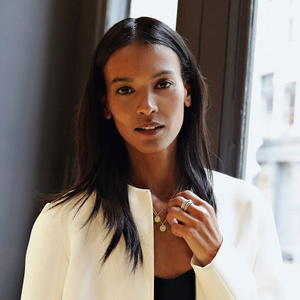