Lara Stone Net Worth: Lara Stone is a Dutch model who has a net worth of $14 million. Born Lara Catherina Stone on December 20, 1983, in Geldrop, the Netherlands, she is one of the highest-paid ladies in the fashion industry nowadays. She was only 14 when she was discovered in the Paris Metro while on vacation with her family, and at fifteen she already took part in the Elite Model Look competition in 1999. Even though she did not turn out a winner, Stone impressed Elite executives who eagerly welcomed her to the Elite Modeling Agency. It was under her mother's sway that she went to Paris and fully dedicated to modeling when she was expelled from school. But she didn't make it in the French capital, spending a lot of time trying to build her book and work off agency debt. A true resurrection followed as she was signed to IMG in 2006, especially after Ricardo Tisci chose her to open Givenchy's Autumn/Winter 2006 haute couture show. Next, she walked for Louis Vuitton, Chanel, Lanvin, Miu Miu, Fendi, MaxMara, Pollini, Prada, Anna Sui, Stella McCartney, Balmain, Dolce & Gabbana, D&G, Givenchy, Karl Lagerfeld, Emanuel Ungaro, among others. In the spring of 2008, she concluded a semi-exclusive contract with Prada, where she was only allowed to walk on other runways after she closed the Prada show. In her resume also can be seen such campaigns as Calvin Klein Make-Up, Calvin Klein Jeans, H&M, Jean Paul Gaultier, Time, DKNY Jeans, CK Calvin Klein, Hugo Boss Orange, De' Type, Revlon, TSUM, Just Cavalli, Max Mara, Sisley, and Givenchy. Enjoying a highly prolific career, she was voted model of the year 2010 at the British Fashion Awards. The same year she tied the knot with British comedian David Walliams, after dating just 10 months. In May 2013, she gave birth to a baby boy. As for Lara's trademarks, they include the gap between her front teeth and her wobbly runway walk, which is because of her size-seven feet, vastly smaller than the regular runway shoe. 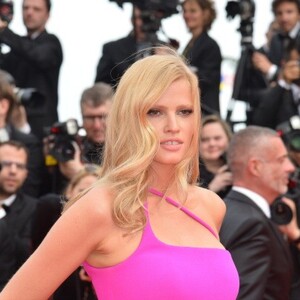